58 new affordable homes have been completed in Salford, Greater Manchester, providing quality social housing from brownfield land. Developed by Investar Property Group and built by Watson Homes, the project is set to be managed by Places for People, and has been constructed to all the standards that that comes with such a partnership – including a reduction in the number of units from the original plan to ensure that the placemaking was the best it could be.

Investar purchased the land for this project in August 2016 for £300,000 without planning. Situated at the corner of Liverpool Street and Weaste Lane, the land was once home to All Souls Remain Catholic Church, which closed in 2010 before its demolition in 2011.

The 0.4 hectare site then remained undeveloped until Salford City Council granted Investar permission to deliver an affordable housing scheme on the site – though as already touched upon, its provision would later be altered by the housing association partner.

The developer originally acquired the land with the intention of bringing affordable housing the area – which was reportedly much-needed. But, rather than developing the homes for private rent or sale, Investar sought to partner with a housing association and a main contractor that both shared its vision for placemaking – each party moulding the project to enable this.

In 2017, working with architecture practice TADW, Investar drew up plans to transform the site into affordable homes – initially 82 properties with 11 townhouses and 71 apartments, which, according to Michael Dong, CEO of Investar Property Group, “gained favourable feedback from Salford Council.”

Dong continued: “Key to Investar’s plans for the site however was the need to work alongside partners that could enable a new sense of community in this location, with placemaking at its heart.”

“Forging a relationship with the new partners meant Investar chose to redesign the scheme to fit the client’s tight criteria,” Dong details. This new vision for Melody Gardens was based on the need to meet Places for People’s delivery model and standards for quality housing.”

Mike Watson, director of Watson Homes, weighed in here: “Investar originally designed Melody Gardens as a mix of apartments and houses totalling 82 units for open market sale, with 70 per cent parking provision. However, on partnering with Places for People, the scheme was completely redesigned to meet the client’s requirements: building fewer units, with less profit, to work as an affordable rent model.”

To enact this new joint vision, Investar worked closely with the housing association to produce a less dense development that was in line with Places for People’s commitment to placemaking. The resulting redesign consists of a mixedtenure scheme of 58 homes, comprising 17 one-bedroom apartments, 31 twobedroom apartments, one two-bedroom bungalow, and nine two-storey houses.

All 58 of these are to be allocated by the local authority Places for People to residents who are in housing need.

Even with such partners, when moving onto the actual land these homes would inhabit, obstacles arose.

Watson explained his thoughts upon first visiting the land: “It was a good flat site when Watson Homes first started on construction, but the biggest challenge was in the ground.”

He continued: “Initially, it was believed all the slabs and foundations from the former buildings had been removed; however, that was not the case.”

The foundations were at substantial depths, which created additional works here, and meant that this element of the scheme had to be extended by several weeks. “Thankfully,” Watson added, “we were able to gain this time back throughout the rest of the build.”

Alongside the foundations, Watson told, water management was as key focus on the early stages of the scheme: “We set out to achieve a maximum of 110L of water per person per day, and had to consider how best to achieve that goal.”

To do so, the contractor introduced measures such as the installation of surface water storage tanks stacked underground, and later in the process, taps that restrict the flow of water and baths that hold slightly less.

The former in particular is useful as, in the event of heavy rainfall, water doesn’t discharge straight into the existing drainage, potentially causing flooding further down the system. Instead it backs up into the storage tanks, and enters the system at a time when it is not as full.

“Overall,” said Watson, “this makes the development more sustainable, and lessens the impact on the current infrastructure in the area.” Once past the foundation stage, Melody Gardens then underwent construction using a traditional brick and block process.

The floors are a pre-cast concrete slab, and each floor is a direct repeat of the one below. The internal fit-out was completed using metal stud walls with traditional plasterboard and plastered walls, and the roofs have been constructed using engineered trusses, with a single ply rubber membrane installed to act as the roof covering.

Watson added: “In all, this created a high quality finish, meeting the exacting standards for new-build affordable homes.”

When discussing the designs behind these affordable homes, Dong explained the process necessary to address the different types of housing requirements – which range from family homes, to smaller, one-bedroom apartments “that are ideal for the ageing population.”

“The houses were all designed to fit in with the neighbouring community and the local environment,” he said, “and the site comes with a strong provision of green space and on-site amenities to aid this, as well as electric car charging points.”

In terms of the spread of these designs, the scheme has been laid out in a way that provides enough density to make the affordable housing model work, without sacrificing on 100 per cent parking provision and recreational spaces for residents.

This thoughtful design carried through into the placemaking aspects of the build, according to Dong, with engendering a sense of community into the development being key: “Places for people says that ‘places only truly succeed when they work for everyone, and when everyone is included’ – this ethos is shared by both Investar and Watson Homes, and Melody Gardens therefore needed to be built in order to deliver social value in the local community.”

He continued: “Creating a community of houses, bungalows and apartments means that Melody Gardens will foster a real sense of intergenerational living – bringing together people from all walks of life in one residential development, where they can thrive.”

Of course, this is not to forget the high level of sustainability specified in the designs, which according to Dong, was achieved largely through a fabric-first approach, “which meant that every construction element was scrutinised to enhance the energy performance and reduce the overall running costs of each home.”

All 58 of these homes have now been given over to Places for People to allocate via its choice-based lettings system. This system is intended to allow residents in housing need who are registered with Places for People to bid for properties that the council advertises – whether it is someone looking for their first housing association home, or a family wishing to move.

“In all,” explained Dong, “a choicebased lettings system puts the customer first, as it empowers people to bid for the homes they want to live in.”

Now that this process is complete, and the project has been fully handed over to the client, the first tenants have already moved in to their properties. This appears to have been a success, with Dong telling that the project has been “extremely well received” so far across its users, the local community, and Places for People.

“Feedback from Places for People’s tenants has been great. As of December 2019, the scheme is almost fully rented, with new residents moving in on the same day of the handover,” he said. “The scheme has been well received by the media too for its contribution to increasing the number of high quality, affordable homes in Salford.”

He believes that this is in part due to the collaborative process: “During the construction phases, Investar held quarterly Neighbourhood Community Group meetings attended by both Places for People and Watson Homes, which kept local residents fully updated on progress.”

These updates included how the scheme is benefitting the area socially by improving social rent provision, and feedback from these sessions was reportedly “overwhelmingly positive.” It is perhaps however mostly due to the flexibility of the developer, and its election to listen to its well-chosen partners, that it found true success. Looking past just profitability – which of course is, and was, an essential part of any development process – placemaking came first for the contributors, and as such Melody Gardens offers those in need more than just homes; it offers them a community. 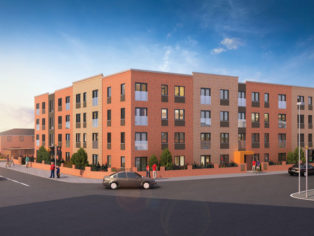