Adrian Storey of Horbury Facades looks at how innovation in modern rain screen cladding materials is resulting in a rise in brick facades.

When most people think of modern rain screen cladding systems, they picture steel and glass. However, architects are increasingly looking to alternative materials that have a traditional appearance but are compatible with modern methods of construction. Brick effect facades, for example, are extremely popular as they can be used to create a structure with a brick appearance but without the time, expense and labour of building in a traditional way.

Dating back to 7000 BC, and originally made from dried mud blocks, bricks are one of the oldest known building materials. The clay bricks that we commonly use today were made popular by the Roman Legions, who operated mobile kilns and built large brick public and private structures throughout the Roman Empire. They built walls, forts, cultural centres, vaults, arches and faces of their aqueducts.

The Herculaneum gate of Pompeii and the baths of Caracalla in Rome are great examples of Roman brick structures that still stand to this day. During this period, the art of brick making was spread throughout Europe, where it is still one of the most common construction materials, particularly for housing.

To this day, a brick facade remains a popular choice with designers. As such, the trend for brick slip panels continues to grow with architects that want an authentic aesthetic, alongside the benefits that are offered by rain screen facades. These include increased insulation performance, reduction in wall thickness and, as brick slip systems tend to be very light when compared with traditional masonry, substantial weight savings.

Lightweight brick slip panels give building designers greater freedom of expression because they avoid the need for heavy masonry-based internal supporting structures. The result is not only a building with a reduced carbon footprint, but one that incorporates a modern aesthetic with a conventional style.

The material’s visual appeal also creates an architectural fusion between other commonly-used facade materials, such as timber and terracotta tiles.

The scheme is a major mixed-use development that will create almost 2,500 new homes and the largest new park in central London for 70 years. West Grove, which is due for completion in 2019, is the second phase of the development and will contain 593 homes in total.

The Highwood Garden Terrace development features a brick slip corium facade in grey and red, in assorted textures. Glazed terracotta tiles in seven varying shades that gradate from buff to a dark red, are also fixed onto playfully arranged infills in a staggered bond of differing lengths. The design of the structure is inspired by traditional London mansion blocks and incorporates a number of tiers where the building steps back to offer terraces to many of the homes.

Aside from the aesthetics that can be achieved with brick slip, the material is more commonly used for larger residential developments as it enables builders to complete projects more quickly.

According to official statistics published in March of this year by the Government, there were a total of 78,930 families living in temporary accommodation at the end of December 2017. This includes 120,510 children, representing a 75 per cent increase since 2010. With the number of people without a permanent fixed abode in England rising, pressure is mounting on local authorities and developers to build new accommodation quickly and cost-effectively to alleviate the problem.

To meet this rapidly increasing demand, the Government would need to commission the construction of approximately 250,000 new homes each year, through to 2030. Currently annual construction levels sit at around 50 per cent of this figure, with only 63 per cent of traditional construction projects delivered on time, and only 49 per cent delivered to budget.

As such, materials that will not only offer great aesthetics, but also enable new residential developments to be completed sooner, are highly sought after. Due to its simplicity to install, covering a building with brick slip is vastly quicker than bricklaying. This not only enables earlier project completion, but also reduces the costs incurred in areas such as waste disposal, deliveries and storage requirements. Furthermore, as brick slip panels are factory made, the quality of workman- ship is often expected to be higher than traditional brickwork.

Brick has been used as a building element for centuries and is still sought after. With a need for more cost-effective and energy-efficient buildings to be completed in less time however, many new developments that require traditional facades now include brick slip panels as an aesthetically pleasing alternative. As such, the rise in specification of this type of facade looks set to continue. 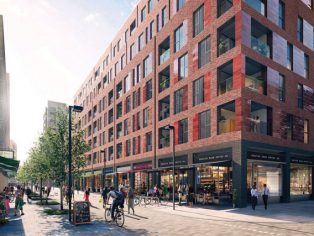