A pioneering modular build to rent scheme, which offers young homeless people the chance to have a place they can afford in central London, has broken ground. Jack Wooler reports on the project.

Developed by charity Centrepoint, Reuben House is a scheme that is intended to provide a reduced rental model for ‘micro-homes’ that will help combat homelessness in London. The new, 33-home modular development is being specifically created to house people experiencing homelessness in Peckham, south London.

Centrepoint is the UK’s leading youth homelessness charity, and the project seeks to provide 300 young people a home and an entry level or apprenticeship role that could lead them to full time employment, all as part of its wider Independent Living Programme.

In order to help meet all needs, the homes are designed to not just be speedily constructed, low-cost and functional, but also comfortable, stylish, efficient and cost-effective. Arguably most importantly, they are also designated for locals, and situated close to the centre of Peckham to avoid tenants having to relocate – or being priced out of the area.

The scheme is the latest part of the charity’s ambitious programme of ending youth homelessness by 2037. The homes’ rental will be approximately one-third of tenants salary according to the charity; typically meaning a 20-year old tenant earning minimum wage (£6.56 per hour/£1,050 per month) would pay around £350 rent for a self-contained apartment. This would “tackle the shortage of quality affordable accommodation head-on, and free up much-needed hostel beds,” commented Centrepoint.

Reuben House is named after the Reuben Foundation, who have supported the project with over £1m to help fund the development.

Inside, each 21 m2 home has a small yet functional kitchen, dining area and a bathroom, as well as space to sleep and relax, making the homes comfortable for young people to live in independently.

It is hoped that, with these basic needs met, the young residents can have a chance to plan their future, such as the possibility of saving for a car, or a mortgage – all the things that become next to impossible without stable accommodation.

Katelin, a 19-year old resident in one of the programme’s other schemes in East London, said that she believes “it’s incredibly important for there to be affordable housing for young people, especially people who have not had the easiest upbringing or the easiest background.”

Katelin added: “Everyone has high expectations for people my age but we can’t be expected to reach those expectations without a solid foundation.”

The most recent iteration of these designs has now been brought to site, with Hull-based modular specialist M-AR completing the build of the 33 homes offsite.

With work on site now well underway, M-AR will continue linking the homes together and landscaping, ahead of the projected May launch.

Working on a turnkey basis, M-AR have taken care of every aspect of the build programme to make the whole process as smooth as possible for Centrepoint. According to M-AR, the modular nature of the project will mean that the homes will be rolled out 40% quicker than if they were using traditional methods, achieved through the overlap of units being assembled and fitted in a factory in Hull while the site in Peckham is prepared.

The units are also said to be very sustainable by its builders, as they are based on templates and models, which means that any unused materials can be recycled and reused on other modular housing units to minimise waste and stop excess parts ending up in landfill.

Delivered to site fully fitted with the kitchen and bathroom, and all electrics and plumbing installed, as well as being fully decorated throughout, the reduced construction times can significantly reduce costs.

Commenting on their role on the project, Ryan Geldard, operations director at M-AR, said it was “a privilege” to be able to do their bit to help Centrepoint in its mission to end youth homelessness by delivering the new safe and secure independent living units. He added that he “can’t wait” to see how the units look once they’re on site, and ready to have the finishing touches needed to make them homes.

Explaining the concerning drivers behind building this important project, Centrepoint explained that 15,000 young people are facing homelessness in London at present, with 122,000 16-24 year olds across the UK either homeless or at risk of being so. The pandemic has only increased the risks.

Since then, the programme has rapidly expanded, and Centrepoint is currently in talks with councils in Barnet, Hounslow, Waltham Forest and Manchester.

Despite this progress, however, the charity is warning that one in five young people using its services are ready to move on but they are still unable to do so due to a shortage of affordable homes and reductions in local authority benefits.

To help counteract this, Centrepoint ’s intention is to work with ethical employers to help ensure young people are earning above minimum wage. This would typically mean that someone in London earning £18,000 per year would pay around £500 per month to live independently.

According to the charity, this is only the beginning – Centrepoint has the ambition of creating 300 homes across London and Manchester within the coming year alone.

As part of growing its programme, Centrepoint says it is interested in connecting with land and development opportunities and industry partners to further expand its Independent Living Programme.

Sally Orlopp, director of the programme, said: “I’ve been working with disadvantaged people for over 25 years, and this is the most exciting and innovative programme I’ve seen, with tangible results in transforming young people’s lives.”

She added thanks to the Reuben Foundation for funding the project: “Without this generous sum,” she said, “the development would not have been possible.”

The Reuben Foundation commented: “To see Reuben House come to life is truly amazing; with each development Centrepoint comes closer to reaching their ambition to end youth homelessness for the next generation, and we are so proud to be a part of this journey”. 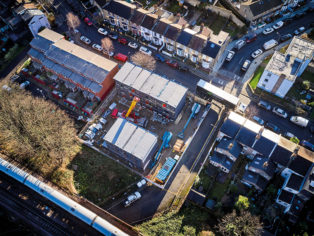