The Mayor of London, Sadiq Khan, has announced his intention to earmark £250 million for City Hall to use for buying and preparing land for new and affordable housing, as he published his first draft Housing Strategy for London. The money made from selling the land to homebuilders will be recycled to buy further land for new and affordable homes, unlocking opportunities across the capital.

Alongside this major new drive to get more land for homes, Sadiq has also set out plans to bring together London’s private tenants and landlords to develop plans for a new ‘London Model’ of renting as he called on Government to help London’s increasingly hard-pressed renters.

The Mayor’s draft Housing Strategy provides a comprehensive plan to address the housing crisis over the next few years. This includes:

The Mayor has made clear that solving the capital’s housing crisis will be a marathon not a sprint. The strategy sets out how the Mayor plans to use his current powers and resources to their fullest extent, but that for a really significant step-change in delivery, the Government needs to step up and play its part. The plan sets out that Government should provide a comprehensive and urgent devolution of funding and powers, that recognises the scale of the challenge London faces on housing.

Alongside earmarking money to secure land for affordable housing, the Mayor will also be recruiting new technical ‘deal making’ experts for his Homes for Londoners team, to identify and prepare the new sites. The Mayor has also made it clear that he is prepared to use City Hall’s statutory powers, including Compulsory Purchase, to their fullest extent where necessary to secure land for new and affordable homes.

The new land fund will be used alongside the record £3.15 billion affordable housing budget that Sadiq successfully negotiated from Government, and City Hall will work with a range of home builders including councils, housing associations and commercial home builders on housing developments. This new approach follows the Mayor’s recent sale of the derelict Webbs Industrial Estate in Waltham Forest which will shortly become a new neighbourhood with 330 new homes to be built by Catalyst and Swan housing associations – 100 per cent of which will be genuinely affordable – together with workshops for local entrepreneurs and business start-ups.

Alongside the new focus on land, the Mayor also wants a better deal for the increasing numbers of Londoners who live in the private rented sector, with the aim of creating a modern, fit-for-purpose and high quality housing option for the millions of Londoners who rent.

The current legal arrangements for private rental tenancies were introduced almost 30 years ago, at a time when the sector was in decline. Today, private renting is growing rapidly and renters urgently need better rights and more security – in line with many other European and U.S. cities. A quarter of all London’s households live in the private rented sector, including 580,000 children – an increase of over 200 per cent since 2004. With a standard tenancy length of just six to 12 months, renters face high rents and little guarantee of security or stability, causing disruption for education, childcare and employment. The system is also letting down the many decent landlords, as out-of-date and confusing regulations make it easier for bad landlords to operate without punishment.

To help deliver a better deal for London’s two million private renters, the Mayor will bring together tenants, landlords, and boroughs to develop a new ‘London Model’ focusing on increasing tenancy security to support a more stable, family-friendly sector, where the legitimate rights of landlords are protected too. Once developed, the proposal will be submitted to Government for its consideration.

“It is shameful that a generation of young people are being priced out of the city they grew up in because of the housing crisis. I inherited a development pipeline where just 13 per cent of homes given planning permission were affordable, which is unacceptable. I’ve been honest from the start that turning things round will take time and fixing the housing crisis will be a marathon not a sprint, but my strategy sets out how we can start making a real difference to affordable housing in the city.

“From £250 million to kick-start my plans to secure more land for new and affordable homes, to a new model and fairer deal for millions of private renters, I want to help all Londoners facing the housing crisis. I will use my powers and resources to their fullest extent, but Government needs to play its part too by giving London the powers and resources we need to see an even greater step-change in the number of homes being built. This launch marks the start of a three-month consultation – I want as many Londoners as possible to let me know their views on how we can improve housing in London.”

“The London Housing Strategy marks an important step in the long journey towards solving the capital’s housing crisis. Central government, the Mayor and the boroughs all have a part to play in ensuring we better meet the housing needs of all Londoners, making it possible for London to grow economically and continue to be a great place to live.”

“We have to dramatically increase the number of new homes London is building, doubling the rate to 50,000 homes each year, so making more land available is absolutely critical. We’d also urge the Mayor to bring new ideas and new entrants into the market to finally tackle London’s housing crisis, including the build to rent developments that give people a better choice of secure, long-term places to live.”

“The housing crisis is one of the most important issues facing London so g15 welcomes this comprehensive strategy.

“The Mayor has played an important role in securing a significant funding settlement for affordable housing delivery. We are ready to deliver on the vision set out in this strategy, and help bring about a step change in the number of homes built in the capital.

“Collectively, the g15 housing associations will build 42,000 affordable homes in London by 2021 and we are the Mayor’s largest strategic partner. We particularly welcome the acknowledgement that City Hall has a crucial role to play in securing the land needed to build the homes, which is the single biggest challenge to increasing supply. We build around a quarter of all new homes in London. If we can secure enough land to build on, and rally the support of our partners, we can build many more.”

“At Swan, we are delighted that the Mayor of London has chosen to launch his new Housing Strategy at Blackwall Reach today. This exemplar £300m regeneration really does demonstrate how, working together with our Borough partners and The Mayor of London, we can deliver more high quality, affordable homes for Londoners, more quickly.

“The Mayor saw first-hand how the new community facility, The Reach, has already become the heart of Blackwall Reach. It’s these additional benefits including improved public realm with amenities for all ages, enhanced access to the DLR and the new Blackwall Reach Trust which will foster future investment, good management and a regeneration legacy, that set Blackwall Reach apart.”

The Mayor’s draft housing strategy includes a range of other measures to significantly increase the supply of new homes in London, including:

The Mayor launched the strategy as he met residents at two major affordable housing developments, Blackwall Reach and Watts Road in Tower Hamlets, accompanied by the Mayor of Tower Hamlets, John Biggs. At Blackwall Reach the Mayor met residents who have benefited from the £300 million regeneration project that has transformed the former Robin Hood Garden Estate into 1,575 new homes, of which 679 will be affordable, with a new school, mosque and community facilities. The Blackwall project has £50m of loan funding from City Hall – around £25m earmarked under the previous administration but then doubled by Sadiq – which will be repaid in full with interest at the end of the development. Sadiq then went to Watts Grove in Bow Common, which has 148 new affordable properties built using £6.8m of City Hall funding allocated in January 2014. More affordable homes (1095) were completed in Tower Hamlets last year than in any other London Borough. 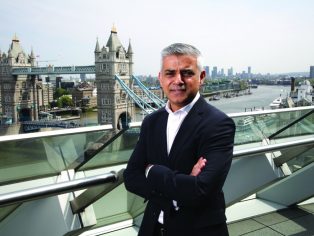