Sadiq Khan has announced a partnership with one of the capital’s largest housing associations, L&Q, which will see £8 billion invested in 20,000 new homes across the capital – 12,000 of which will be genuinely affordable.

This is the first agreement under the Mayor of London’s record-breaking £3.15bn affordable housing deal secured from government last November, which will see 90,000 new affordable homes started by 2021.

The partnership with L&Q will see £8bn invested in 20,000 homes in London, of which at least 60 per cent will be genuinely affordable. City Hall is contributing £400m towards the sum to help boost affordable housing delivery and to assist with land purchases and infrastructure costs.

The announcement came on the same day that the Mayor confirmed 100,000 Londoners now have access to the employers’ housing pledge he launched in January with business organisation London First – with 23 of the capital’s employers now taking part, offering employees help with housing costs including access to a tenancy deposit loan scheme.

The partnership with L&Q – the first of its kind between City Hall and a housing association – is a major commitment to building new homes across the capital and sets out the Mayor’s clear plans to work with housing associations that are prepared to build at scale and willing to deliver at least 60 per cent affordable housing. L&Q has also indicated its commitment to making significant new investments in construction skills and training to build homes for Londoners.

Sadiq hailed L&Q’s commitment to building thousands of good quality homes that are designed to last – and has called on other housing associations to follow suit and demonstrate they are ready to take on similar projects before he announces other large-scale partnerships when further funding is allocated in the summer.

“For far too long, London has not been building enough homes. This has meant that Londoners born and raised in our great capital have struggled to rent and stood little or no chance of owning a home in their own city.

“I welcome L&Q’s commitment and significant investment in building new and genuinely affordable homes for Londoners. This announcement today demonstrates real progress on the long road towards tackling London’s housing crisis and signals my intention to work with housing associations to deliver thousands of homes with at least 60 per cent being affordable. I urge other housing associations to work with us to get on and build the homes London needs.

“I have been clear that fixing the housing crisis will be a marathon and not a sprint, but I am determined to lead from the front and get on with building affordable homes for Londoners to rent and buy.”

“London has been L&Q’s heartland for more than 50 years, and we are committed to prioritising development in the capital.

“Over the last five years L&Q has invested more than £2 billion in new homes for London. Now, through this ground-breaking strategic partnership, we will build upon our existing pipeline and devote significant additional capacity into delivering even more new homes in the capital. Our aim is for 60 per cent of these homes to be genuinely affordable. We will also commit to major investment in construction skills and training.

“L&Q and the GLA have been forging closer ties over many years to tackle London’s housing crisis, and this strategic partnership takes our ambition to an exciting new level. By working together, we will guarantee more investment in apprenticeships, jobs, innovative methods of construction, economic growth, communities and homes for years to come.”

On the day the Mayor launched the new partnership with L&Q, he also announced a new milestone in his efforts to help hard-working Londoners with the rising costs of renting in the capital.

In January, Sadiq launched the London First employers’ pledge on housing, urging employers to sign up and offer tenancy deposit loans to their staff to help with the cost of renting in the capital. Today he reveals that tenancy deposit loans and other help with the cost of housing are now available to more than 100,000 employees in the capital, with 23 employers now having signed up to the pledge from Fifty Thousand Homes, a London First campaign to double the rate of housebuilding in the capital.

The Mayor has this week written to a further 250 London Living Wage employers in the capital, encouraging them to support their staff and introduce the tenancy loan too.

“It is fantastic news that more than 100,000 Londoners are now in a position to get help with the cost of housing in London from their employers, but we can’t rest on our laurels – we have to do more.

“That is why I have written to 250 London Living Wage employers, who have already taken the first step in supporting their staff, encouraging them to introduce tenancy deposit loans in what I see as an important next step. I want more businesses and organisations to help roll out this scheme across our city and ensure London remains a city for all Londoners.

“We have to unlock housebuilding in the capital – London’s housing crisis is fundamentally a question of supply.  Employers are also stepping up to play their part: tenancy deposit loans or mortgage guarantees can make a real difference to young people struggling with rent or trying to get onto the housing ladder.

“The Fifty Thousand Homes initiative is off to a great start – with over 100,000 Londoners now covered by the employer pledge – but we need more organisations to sign up and pledge their support at fiftythousandhomes.london.” 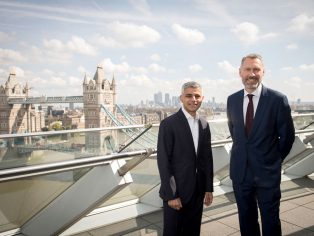