Sadiq Khan has announced a deal with councils and housing associations in London to start building an extra 50,000 affordable homes to rent and buy over the next four years

Housing associations and councils made the commitment in response to the Mayor’s first call for bids to the record-breaking £3.15bn affordable homes fund he secured from the government in November last year. It represents almost treble the 18,000 homes secured by the final call for bids issued by the previous Mayor in 2014.

The announcement will see an estimated £1.7bn invested in 49,398 genuinely affordable homes being built, with new homes in all 32 boroughs and the City of London. They will be delivered by 44 housing providers – including large and small housing associations, as well as nine London councils.

Of the total, 17,500 will be for rents around social levels, and just under 32,000 will be for a combination of the Mayor’s new London Living Rent and Shared Ownership. London Living Rent is a new type of tenancy Sadiq introduced last year to help middle-income earners in the capital save for a deposit to move into shared ownership by offering them rents based on one-third of average local gross household incomes.

Housing associations are being given the flexibility to swap homes between London Living Rent and Shared Ownership depending on local circumstances when homes are completed. Sites have already been identified and bought for almost half the 50,000 homes – meaning delivery can get underway immediately – with the major housing associations committing themselves to working with City Hall to bring forward land for the remaining homes allocated.

“I want to see everyone playing their part in tackling the housing crisis in London, because it is simply unacceptable that Londoners continue to be priced out of a city they call home.

“We know that solving the housing crisis is not going to happen overnight, but I very much welcome so many housing associations and councils matching my ambition by committing to build the new and genuinely affordable homes Londoners so desperately need.

“I am delighted that we have set a City Hall record for the number of homes allocated funding – but I am clear that we have got much more to do to secure the land we need to build homes and ensure we have sufficient capacity in the construction industry.”

“Councils are doing their utmost to tackle the housing crisis which, without action, will result in those providing vital services in our communities being forced to move out of the city. This package will provide much-needed additional support to help boroughs and housing associations realise their ambitions of providing high quality, affordable new homes.”

“With the average monthly rent now at £1700, businesses are increasingly worried about their employees being priced out of the capital. As the Mayor gets to grip with the reality of housebuilding, it’s great to see him making good on the promise of tens of thousands of affordable new homes. But London’s housing shortfall hasn’t been addressed for years – to catch up to the volumes we need the Mayor has to keep up a drumbeat of housebuilding across the capital, otherwise we risk losing the people we need to stay competitive.”

All homes will be built to the highest standards and expected to meet the design and sustainability standards set out in the London Plan. Like all new buildings in London, they must meet stringent safety standards set by government. Measures include means of warning and escape, sprinklers, fire detection and fire alarm systems. The Mayor will be setting out what more he can do in terms of fire safety when he publishes his new London Plan later this year.

City Hall has allocations for about 30,000 homes in place from bids made prior to the current round, and there remains a further £446m available for when bidding re-opens later this year. Together with those homes announced today, these allocations will all contribute to the Mayor’s ambitious target of starting 90,000 new affordable homes by 2021. 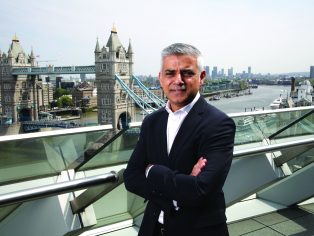