The Mayor of London, Sadiq Khan, has demonstrated his determination to get London building the affordable homes it needs by ripping up existing planning rules and calling on homebuilders to develop sites at higher housing densities to substantially increase capacity in the capital.

In a major housing policy in his new draft London Plan – launched today at Barking Riverside – the Mayor has removed outdated constraints and rigid density guidelines to give a significant boost to the number of new and affordable homes given planning permission in the capital.

Sadiq has thrown out the previous Mayor’s policy, which proved complicated and set meaningless maximum rules for the number of homes on developments, in favour of boosting the number of well-designed homes sites can deliver.

In his new draft London Plan, the capital’s strategic planning bible, the Mayor has set out how he will ask homebuilders to maximise the use of valuable land in the city – and that means developing sites with more homes on them than existing developments nearby that would have had to follow previous guidelines. Sadiq believes increased numbers of homes should be built on sites near town centres or good public transport, reducing the need for car parking spaces within developments. The Mayor’s Plan says proposed development on sites that do not clearly maximise housing density should be refused.

He believes rather that councils – working with developers and housing associations – should take a case-by-case approach to each site to determine its capacity based on surrounding infrastructure.

The new policy also emphasises the importance of good design and will be applicable to buildings of all types, including low-rise, medium and high-rise. This new approach is supported by a far stronger policy on housing standards, including minimum space standards, which sets out how a home should be designed. The Mayor is clear that, while he is encouraging homebuilders to make best use of land in the capital, he expects councils to refuse any applications that come forward with homes that do not meet his new standards.

The draft London Plan also includes the Mayor’s key strategic housing commitment for 50 per cent of all new homes built to be genuinely affordable – to be achieved through planning, investment and building on public land. It strengthens his new approach offering private developers a fast-track route to planning permission if they reach a minimum of 35 per cent affordable.

New ambitious targets have been set for councils across the capital, as part of an overall London Plan figure of 65,000 homes a year – roughly double the current rate of homebuilding. For the first time, targets in the Plan show how capacity can also be reached on small sites, which must now make a significant contribution to housing supply. Sadiq believes there is capacity for 24,500 homes a year on London’s small sites – typically those between one and 25 homes – and asks boroughs to approve applications for small developments unless they do not meet his strict design standards. It forms part of the Mayor’s commitment to stimulate growth for small and medium-sized builders in the capital, which has for too long had an over-reliance on London’s large developers building the majority of homes in the city.

The Mayor is also using his London Plan to provide greater protections for industrial land while also looking at innovative solutions such as stacking up distribution sheds or encouraging development of industrial workspaces side by side with new homes to knit industry back into the fabric of the city.

In Sadiq’s first London Plan he has also introduced new policies on:

“With London’s population expected to increase by 70,000 every year, reaching 10.8 million in 2041, it’s vital we properly plan for growth with new affordable homes in every area of the capital.

“I am using all of the powers at my disposal in my first draft London Plan to tackle the housing crisis head on – removing ineffective constraints on homebuilders so that we can make the most of precious land in the capital to build more homes in areas with the best transport links.

“My London Plan sets out how we are planning for the challenges our great city faces, but crucially focuses on my vision of a London that welcomes growth, celebrates its diversity and ensures every Londoner gets the opportunity to fulfil their potential.”

“London’s success comes from the people who live and work here and we’ve been failing to build the homes they need for too long. The Mayor’s commitment to tackling our housing crisis is hugely welcome, but the London Plan must now deliver its part.

“By being smart about how and where we build, making better use of land and setting targets that councils can and must hit, the Mayor will help open a door for the countless people priced out of a place to call home.”

“Making better use of the many existing small sites that are scattered over the capital is essential if we are to build the number of new homes Londoners need. The London Plan’s moves to favour appropriate residential development on small sites is therefore a welcome initiative. It will also boost and strengthen the capacity of small and medium-sized house builders to build more new homes.

“FMB research has consistently shown that a lack of available and viable land is the main factor constraining the ability of small builders to deliver more homes. Indeed, over half of SME house builders believe that the number of small site opportunities is, if anything, decreasing. The London Plan goes further to address this issue than the proposed changes to national policy laid out in the Government’s Housing White Paper. In order to reach the 66,000 new homes London needs to build each year, this renewed emphasis on small sites is vital.”

“The sheer scale of the housing crisis in London is unparalleled. The Mayor’s work to set out a vision for London’s development and deliver it with London boroughs and other key partners such as TfL and the construction industry demonstrates his understanding of how only sustained and co-ordinated efforts across different sectors can hope to fix the capital’s broken housing market.”

The draft London Plan has been launched today, with a three-month consultation officially starting on Friday. The Mayor launched it at Barking Riverside – one of London’s largest brownfield sites with a capacity for 10,800 new homes by 2034, of which up to 50 per cent will be affordable. The site also includes 65,000 sq mtrs. of commercial, retail and leisure development, up to seven schools and work is due next summer on the new Barking Riverside Overground – a  4.5 kilometre extension of the Gospel Oak to Barking line.

“The London Plan that Sadiq Khan launched today takes an imaginative approach to tackling the housing crisis. This strategic plan for London will ensure that neighbourhoods across the capital continue to flourish, with the right balance of new housing and much needed transport infrastructure.

“With the right support from City Hall, housing associations like L&Q can get on and deliver the homes this city needs. At Barking Riverside, L&Q is working with the Mayor of London to do exactly that, delivering nearly 11,000 new homes, a new train station and up to seven new schools in London’s only healthy new town.

“This builds on the strategic partnership we agreed with the GLA earlier in the year that will see us deliver 20,000 new homes across the capital – 12,000 of which will be genuinely affordable.” 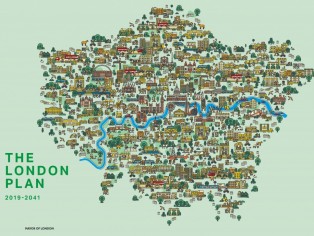