The Mayor of London, Boris Johnson, has announced his intention for millions of funding for two new schemes to help Londoners into affordable home ownership and accelerating the delivery of new homes, whilst visiting a major Orbit regeneration project.

During his visit to Erith Park, in Bexley, the Mayor unveiled plans to give a £180million funding boost through The Mayor’s First Steps Challenge Fund, which aims to accelerate the delivery of 4,000 new shared ownership homes between 2015 and 2020. The fund is being made available on a recoverable basis so that money can be reinvested to provide more opportunities for affordable home seekers, helping achieve the Mayor’s aim of assisting 250,000 Londoners into low cost housing by 2025.

He is also giving up to £40million of loan finance to Gentoo Genie for a new innovative housing product where buyers will need no deposit or mortgage to purchase their home and at the end of the agreement customers own 100 per cent of the home outright.

The announcements were made as Boris Johnson visited Erith Park, which has 80 per cent affordable rent and shared ownership homes. The Mayor joined two families who will be moving into shared ownership homes for their first visit to the new houses. He also met one of the residents of the former estate who moved into her new home in December.

The Mayor of London, Boris Johnson said: “Shared ownership is crucial in helping the unprecedented numbers of people in London desperate for good quality low cost housing. Families need larger properties and Erith Park is testament to the number of well-designed affordable three bedroom family homes with gardens that can be delivered with good planning, major regeneration and investment. I want the funding announced today to help thousands more Londoners own homes and create more developments like Erith Park delivering excellent affordable properties.“

The transformation of Erith Park is being delivered by Orbit Group, in partnership with Wates Living Space, London Borough of Bexley and the local community. It has been given £23million affordable housing funding by the Greater London Authority (GLA). The site was formerly known as the Larner Road estate, which had a large number of single occupancy flats and suffered from high crime levels, making it undesirable for many local families.

The first part of the major regeneration project will deliver 343 new homes, including three and four-bedroom family homes with gardens, with a three-bedroom shared ownership house costing approximately £240,000. Erith Park will provide a mix of homes for affordable rent, shared ownership and outright sale, and will include 60 of the original households who have chosen to remain in the area. Phase 2 of the scheme will include 244 homes and, subject to planning permission, Orbit anticipates starting on site by March 2015.

“We are delighted to see the commitment to increasing the number of shared ownership homes by the Mayor of London. This funding will make a significant impact on the lives of people like our new residents at Erith Park, who want to get on to the housing ladder. Recent research by Orbit shows that demand for shared ownership homes outstrips supply by 10:1 so there is a clear need for more homes.”

Orbit Group and the Chartered Institute of Housing (CIH) have recently published an interim report exploring the potential to expand shared ownership so it becomes a fourth mainstream tenure alongside home ownership and social and private renting.

The report sets out the key issues that government and the housing sector will need to address to increase shared ownership from its current 15,000 homes per year to at least 30,000 within the next Parliament – around 13% of the 240,000 new homes England needs each year. The full report will be published in February. 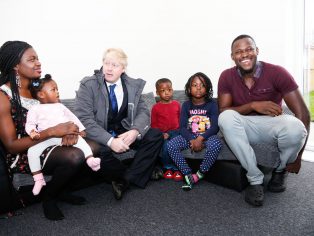