The site was formerly occupied by the Cardiff Metropolitan University’s School of Art and Design until it relocated its operations to its new Llandaff campus in September 2014. The proposals seek to clear the existing site and replace them with two buildings which draw their design rationale from the existing buildings around the site – with both the taller towers to the north, and the much lower lying terraces to the east reflecting their context. A muted materials palate of red brick, coursed rubble, and seamed metal also reference the surroundings, softening its visual impact.

The northern building contains 2,3, 4, and 6 bed apartments whilst the south consists of studios and twodios offering prospective occupants a wide range of accommodation types. Extensive communal facilities including a library, gym and cinema will be provided to complement the students stay.

A major component of the scheme is the extensive external areas which our landscaping team has been designing. The courtyard nature of the two buildings has created two landscaped areas which allows the common room areas to spill out into these spaces, blurring the boundaries between inside and out. A major new public pedestrian route across the site has also been developed as part of the scheme, with a new boulevard linking Newport Road and Moira Terrace.

“Stride Treglown has succeeded in designing and gaining planning permission for a large and challenging site, whilst incorporating the latest technology and design. Stride Treglown is a valuable partner in helping Fusion Students expand to new cities across the UK.”

Howard Gardens is due to be completed for the 2017 academic year. 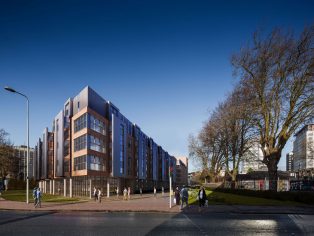