Achieving the first affordable Passivhaus scheme in the characterful region of Stratford-upon-Avon was not without its challenges, as James Parker reports.

Passivhaus is seen as the gold standard of energy efficiency in housing, with an increasing number of schemes popping up across the country. However, the reality of meeting carbon reduction goals affordably for tenants, owners and housing authorities via Passivhaus may be harder than it may first appear, if a new project in Warwickshire is anything to go by.

Warwickshire Rural Housing Association (WRHA) has a mission to provide affordable rural housing in the area for people who would not otherwise be able to afford to live in the communities they grew up in. Together with Waterloo Housing Group and Bouygues, it is building 14 homes on a site in the village of Wootton Wawen; picturesque, yet bisected by the busy A3400.

It’s not only the first affordable Passivhaus scheme in this traditional and rural village five miles from Stratford-upon-Avon, but is also thought to be the first Passivhaus project of any kind in Warwickshire. As such, several bodies were instrumental in getting this pioneering project off the ground.

Neil Gilliver is development officer at WRHA, which is spearheading the scheme. He says there was “a lot of momentum for the project from different agencies.” The local parish council as well as Stratford-upon-Avon District Council were “very keen to see a groundbreaking development” which would help tenants access affordable housing that would also offer them low fuel bills, he says. WRHA also worked closely with Warwickshire Rural Community Council, who play a key role in delivering rural housing. In addition, Waterloo Housing, acting as agent, was “keen to be involved.”

Seven houses and seven bungalows are under construction on a site close to the main road, and the development is due to be completed in April 2018. They are all intended for affordable rent (80 per cent of market rent), apart from two houses which will be sold as shared ownership. All homes are being part-funded by the Homes and Communities Agency, although according to Gilliver, they did not stipulate that would be such an energy-efficiency exemplar project. As well as the district council putting in some funding, WRHA is paying around £1m towards the scheme including highways improvements, which is a big commitment for the organisation. As Gilliver said however, it “wanted to go that extra mile.”

Challenges to the scheme began with the fact that it falls within the green belt. The case for development was made however via a Rural Exception Planning Policy, identified in a Housing Needs Survey in 2011.

The project team needed to do a “lot of work” to reduce the impact on its surroundings, including planting a 12 metre “woodland belt” of trees around the scheme. Gilliver says that addressing this meant employing consultants to undertake landscape impact assessments, and “heavy involvement” of landscape architects.

The project also faced “significant highways issues,” he says, adding “county highways were initially not very happy.” They were concerned about visibility and speed of cars given that a new entrance road to the development would be created off the A3400, and following a community consultation, the speed limit was reduced from 50 to 30 mph.

A traffic assessment and special audit was done, and the resulting solution was to widen a section of the road to allow a crossing island, and to improve lighting. Gilliver did a presentation in the village hall to explain why the changes were needed. He says: “Significant investment of over £200,000 has gone into just ensuring safer pedestrian and vehicle movement.”

Passivhaus buildings (i.e. those which have been certified by the Passivhaus Institute in Germany) are heavily insulated and rigorously airtight constructions that substantially exceed UK Building Regulations. So much so that typically they only require the heat from the sun, occupants and appliances to heat homes. The downside of this is that homes have to be mechanically ventilated, normally in the form of Mechanical Ventilation with Heat Recovery (MVHR), as is the case in Wootton Wawen.

Due to the nature of Passivhaus designs being optimised for energy efficiency, with the emphasis on larger windows to south elevations in order to grab solar gain and reduced window-size to the north, they can present a challenge to those preferring to stick to traditional styles. And in Wootton Wawen objections were a continual feature of the planning phase.

The sensitivities to the new-look design were acute in some quarters, with the planning case officer refusing to support the design (by Morton Wykes Kramer architects) throughout the project’s gestation. Interventions such as adding lead-effect canopies over windows to not only mitigate solar gain but also fit with the local vernacular, were not enough.

However what Gilliver says was a “lot of hard work from the parish council and working with council members” brought results. The project architect did a presentation for council members, and explained how Passivhaus works, “and they thought it was wonderful.” This was followed up by meetings with ward members of the district council to ensure they fully understood it, and they then spoke at the planning committee together with parish council members, in favour of the scheme. The committee voted unanimously to support it.

Gilliver says “It was a very tough battle; it’s not just about achieving a Passivhaus development, getting the whole thing through the planning process was an almighty fight.” He even says that despite the challenges of building to such a standard, the construction phase currently underway is “the easiest part.”

The buildings are, somewhat unusually for Passivhaus, of traditional brick-and-block masonry construction, with a 300 mm insulation-filled cavity between the two. The details have to be achieved to an exacting standard, as the buildings will be air-tested post construction to ensure they meet the demanding Passivhaus standards. As Simon Hodgetts, principal design manager at Bouygues UK says, the firm was intrigued with the proposal. Having normally undertaken Passivhaus schemes using timber frame: “It became apparent that the standards could be more easily achieved using a super-insulated traditional masonry approach.”

He says that the enhanced U-values of the project resulted from the ground floor slab design, the junction between ground floor and walls, enlarged cavities tightly filled with insulation, and very careful attention to air-tightness and build quality. Bouygues employed several ‘smart’ strategies to get this right, including rigorous reporting of key stages, using trades with experience of Passivhaus, and using an experienced Passivhaus consultant, Design Buro. In addition, Eco Design & Construction brought their “invaluable” expertise to the project, says Hodgetts, “taping and sealing the various junctions and key components, and also troubleshooting the air testing process”.

Wider sustainability elements of the project included using local joinery firm Munster Joinery for all doors and windows, as it now produces a range of Passivhaus-compatible wood windows. In addition, part of the woodland belt has been designed as a natural ‘sponge’ to absorb surface run-off water from the development, to avoid it contributing to flooding. A soft grass footpath runs through the woodland to provide an added amenity for residents.

Despite their thick walls, space standards are normal, and some move beyond HCA standards, says Gilliver. Homes are designed to be more open plan on the ground floor than affordable housing is generally, he says, to both fit modern lifestyles, and to allow light to filter through to the side with smaller windows.

In addition to the planning, the biggest challenge of the development according to Neil Gilliver was the cost of building to Passivhaus standards. After shortlisting a handful of contractors who the housing association believed had the capacity to deliver this rigorous level of construction, it was in for a shock. “When the tenders came back it was significantly more than we were expecting, it was on another level. We then had to do a lot of number crunching to make sure we could afford this.”

Compared with a typical £1600 per m2 that the HA would normally expect to pay, this scheme including all of the highways and green belt mitigation work came in around £2500 m2. He says this is prohibitively expensive in terms of more similar schemes for WRHA. “We have ethical reasons for doing this project, but from what I’ve seen so far I don’t think there are many such schemes done on a commercial basis.”

Despite the high capital costs, the long-term costs for residents who may well have been in fuel poverty previously, will be drastically reduced. Their space heating costs will be up to 80 per cent lower thanks to the airtight, highly-insulated homes, and although air source heat pumps will be installed as there’s no gas in the village, heating demand should be minimal for the residents. 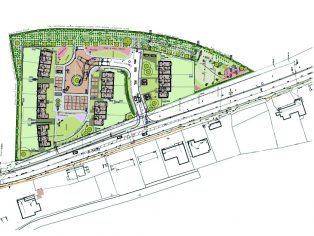 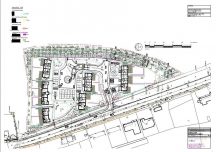