Former Deputy Prime Minister John Prescott has visited people benefiting from the innovative Sunderland-based home purchase plan Genie, and says the scheme should be made available to thousands of people in the UK.

Lord Prescott was invited to see Genie at work after he praised the scheme in his national newspaper column, calling it “a brilliant idea”.

Genie is run by profit-for-purpose North East social business Gentoo Group, and was the brainchild of Chief Executive Peter Walls, who was concerned about how difficult it was becoming for people to own their own home.

Genie buys a property then enters into a long-term agreement with a customer with a 30-year payment plan that ends with the customer owning the house. During the term of the agreement the customer has the same rights as a homeowner. Customers pay no deposit and to date have not had to pay stamp duty.

After a briefing on the scheme, Lord Prescott visited Genie homeowners Ben and Lucy Watson, followed by Lorrie Haig and David Newton. Both couples live in Doxford Park, Sunderland, with their children.

“I was enthusiastic about this scheme before I came here, but meeting people face to face really brings home the benefits that Genie provides.

“The Genie scheme means people don’t have to find a deposit. They also know exactly how much they will be paying for five years, which is more than people on a mortgage can say.

“The first five years of home ownership can be tough for families, and it’s great that with Genie they can own their own home and use their savings to buy furniture and carpets and the rest of the things they need.

“I’ve been delighted to see the children out playing in their gardens today – the future of our children is what this scheme is all about.

“I’ll continue to press for Genie to be extended right across the country. It’s something that should be available to thousands of people in the UK.”

Lord Prescott’s hosts Ben and Lucy Watson – parents of Daisy, four, and baby Penny – said they were delighted to talk to him about how the scheme has worked for them since they bought their house in 2012.

Previously, they were living in a rented flat, but when househunting they found they would struggle to get a mortgage. Genie provided the perfect solution in the shape of a large family home.

“There’s a lot of talk at the moment about interest rates rising, but we know exactly how much we’re going to be paying for five years, and that helps us to plan.

“It’s a bit easier now to get a mortgage, but Genie is still attractive because we were able to use the money we’d saved to turn our house into a home.”

Lord Prescott also talked to Lorri Haig, who lives nearby in a three-bedroom house at Beckwith Green with partner David Newton and their three-year-old daughter Isobel.

Lorri works in the Genie applications team, and realised during training that the scheme could provide a perfect solution for her family.

“We’d really outgrown our one-bedroom flat, but now we have our dream home,” she told Lord Prescott.

After the visit, she said living in a Genie home had confirmed everything she believed about the home purchase plan. She said:

“I know I work for Genie, but it really is an excellent scheme.”

“It would be superb if it could be made available to people all over the country, because it would give them an option other than buying a home through a mortgage or cash.

“It was lovely to meet Lord Prescott and talk to him about our home – he was very nice.”

The scheme was praised recently by Labour peer Lord Adonis in his Economic Review for the North East, where he called it:

“a highly scalable product that – with support – could attract considerable institutional investment that would make a major impact on housing demand and supply.”

“Our trial in this region has proved the demand for Genie, a true innovation in the housing market.

“Lord Prescott’s support is highly appreciated, because it provides badly-needed help for people to get onto the housing ladder at a time when home ownership is falling.” 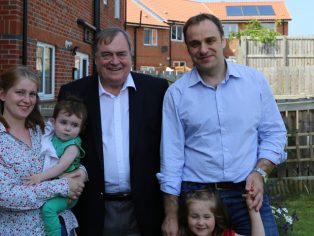 Lord Prescott with Ben and Lucy Watson and their two daughters Daisy and Penny at their home in Doxford Park, Sunderland