Centre Point, the 34 floor storey style icon has today been wrapped, top to toe, in a bespoke number, inspired by the building and designed by globally renowned fashion designers Eley Kishimoto. Standing 117m tall, the eye-catching creation is the UK’s tallest building wrap and will clothe the London landmark for six months, while at ground level the area is being transformed into a new destination with a brand new public space and piazza in the heart of the West End. The artwork on the wrap, named ‘Private Views’, is inspired by Centre Point’s 1960’s iconic architecture.

Printed in monochromatic shades of black, white and grey, the geometric pattern is an interpretation of the dramatic shadow effect the sunlight has when it falls on the building.

To mark the unveiling of the Centre Point wrap, another 60’s icon will take to the streets of the west end – a fleet of BMW Minis dressed in Centre Point inspired prints, ‘Private Views’, ‘Central Link’ and ‘Urban Meadows’ will strut through Central London from Friday until Sunday, crossing from the North to the South and the East to the West of the city.

Centre Point has also partnered with the best doughnuts in the capital, Crosstown Doughnuts, who have just opened their latest store in Soho. The first 100 people who keep an eye out for the minis and Tweet or Instagram a photo of the cars to @centrepointLDN using the #centrepoint will be lucky enough to receive a box of Centre Point patterned Crosstown doughnuts to either collect or have delivered by the Minis themselves within a mile of Centre Point.

As the wrap’s completion is celebrated by the Centre Point printed minis, almacantar’s plans are underway for significant changes at ground level. The development of a retail and new public square is set to go ahead, delivering 41,780 square feet of new retail space. In collaboration with Camden Council and Transport for London, the plans will transform the area around Tottenham Court Road, with a mix of cafes, bistros, restaurants and shops, both small and large, centred around the piazza. For the first time, the area will truly connect theaterland in Covent Garden, with Oxford Street, one of the world’s most famous shopping streets and beyond into Bloomsbury and Soho. The redevelopment will be complete by 2017, creating a new destination in time for the arrival of Central London’s major transportation hub, Crossrail, in 2018, at the adjacent Tottenham Court Road station.

“For us, it was key to produce a piece of artwork for Centre Point – something that London and Londoners would be able to enjoy whilst the building is in the process of revival. We wanted to make a statement with the country’s tallest ever building wrap and our vision was for a beautiful graphic image that acted as a visual representation of the building. We chose ‘Private Views’ from a number of Eley Kishimoto’s bespoke prints, created for Centre Point, because it beautifully emulates the building’s design and architectural flare that has long been admired, since it was first built fifty years ago. The wrap is the first stage for us in our plans to revive Centre Point as a destination for Londoners to live, eat, drink, shop and dwell in.”

The ‘Private Views’ print was chosen from a series of 17 patterns that Eley Kishimoto created. Once designed, the UK’s tallest wrap took eight weeks to produce. Design company, Hat Trick, ensured the repetitive geometric pattern was carefully overlaid onto the monoflex material and it was tested to withstand strong winds and rain conditions without the print running off. It was erected in layers over a four months period. At which time the process of the redevelopment of the building itself commenced with the removal of the window glazing. The wrap was produced in 70 rolls, each 45m in length to cover the circumference of the building and will surround Centre Point until Spring/ Summer 2016.

“I’ve had a strong affinity with Centre Point ever since I worked on a fashion show in the building during the eighties, when I was doing my fashion degree, so it’s been a real pleasure to work so closely with the Centre Point landmark again. Inspiration for the 17 prints came from spending time within and around the building and the patterns are an interpretation of its 1960’s architecture, the repetitive nature of its structure and the way the skyscraper acts as a central, focal landmark for Londoners. It’s so exciting to see our work on such a huge scale, acting as a backdrop in the centre of one of the capital’s most vibrant neighbourhoods.”

Centre Point was built in 1966 as London emerged on the world stage as fashion’s leading player. Originally developed by property tycoon Harry Hyams, Centre Point has been a focal point for London since. The Richard Seifert–designed landmark can be seen from all corners of the capital and is one of London’s original skyscrapers, standing amid the city’s most historic and dynamic neighbourhoods.

Join the conversation at #CentrePointLondon and follow @centrepointLDN to track progress of the redevelopment as the destination is transformed. 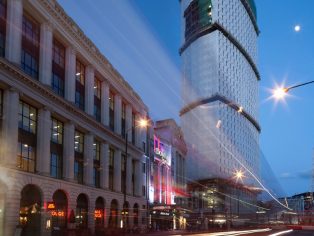