London & Oriental has unveiled Buckingham Green, its new 240,000 sq ft mixed-use project situated between Victoria and St James in Westminster, London SW1. The comprehensive redevelopment of 64-65 Buckingham Gate, once the headquarters of Rolls Royce plc, will be complete by Q2 2018 and aims to deliver a new premier office and residential address within an appealing community setting in contrast to the large-scale developments in this rapidly evolving part of London.

Buckingham Green will comprise a total of 55,389 sq ft Grade A office accommodation, 11,334 sq ft of high quality retail and 65 private rented sector apartments across three buildings set in 0.25 acres of public realm centred on a new pedestrianised square. Designed by Fletcher Priest Architects, the scheme utilises the core of the site’s existing tower to form No. 1 and No. 2 Buckingham Green with two new buildings – No. 3 Buckingham Green and The Gate House – providing additional space that is sympathetic to the site’s historic setting.

Inspired by Mies van der Rohe, the reimagined 16-storey tower will comprise both residential and office space with separate entrances provided for residents and office occupiers. No. 1 Buckingham Green will contain the collection of luxury one, two, three and four bedroom rental apartments from floors 5 to 15. Each home will have a unique layout and carefully designed interior, with residents benefitting from 24-hour security and concierge services and the convenience of basement car parking for up to 37 vehicles.

No. 2 Buckingham Green will contain 24,715 sq ft of flexible office space on the lower four floors of the tower, which is accessed through an elegant Carrara marble lobby with fully glazed entrance. Buckingham Green will deliver office floorplates of between 2- 6,000 sq ft across its three buildings to meet occupier demand for smaller suites, something lacking in the traditional St James’s office market and particularly in Victoria. Local agent Tuckerman’s predicts prime office rents to stabilise at £82.50 per sq ft in 2017 although rents are not being quoted by the Landlord at this stage.

In contrast to the glass façade and striking black metal-cased windows of the central tower, No. 3 Buckingham Green on the north side of the site will be newly constructed in a lattice work of handmade red brick with large full height windows to reflect the ornamented Victorian buildings in the neighbourhood. It will contain 28,183 sq ft of office space over five floors accessed through a vaulted reception area, along with a large private roof garden and a series of terraces for the exclusive use of occupiers.

The Gate House on the south side of the site has a unique trellised metal façade that forms a rounded exterior creating another distinctive dimension to the development. The interior of polished concrete and bronze tones houses a further 2,491 sq ft of office accommodation across two floors.

The retail offer at Buckingham Green will echo nearby Elizabeth Street with ambitions to secure boutique retailers and restaurants for the scheme’s seven ground floor units. This will complement Victoria’s restaurant and retail transformation, which has made the area into a viable shopping destination and made the location more attractive to occupiers and residents alike. Tuckerman revealed that retail rents along Victoria Street broke through £275 per sq ft barrier in 2016 in response to demand from retailers attracted to the area’s seven-day trading pitch.

“Buckingham Green will create a new estate between Victoria and St James inspired by the area’s rich architectural and cultural heritage. The neighbouring area has undergone a significant transformation with large-scale development delivering new office accommodation and improved amenity to make Victoria on of the most desirable new locations for occupiers. However, we see an opportunity to deliver a scheme that complements this change by creating a new community for occupiers with smaller space requirements and that attracts new residents to the neighbourhood. We have drawn inspiration from established London villages, such as Marylebone and Chelsea, and we hope to attract new boutiques and artisan eateries to the retail units to create a distinct destination.”

“Buckingham Green is a rare chance to remodel a piece of quintessential London with a fascinating mix of buildings and uses around new spaces that connect to the intricate network of streets around St James’ Park.”

Buckingham Green is within one minute of St James’s Park underground station and is around a five-minute walk from the newly revamped Victoria Station. It is situated between Victoria Street and St James’s Park in the heart of Westminster, adjacent to the historic Blewcoat School, Caxton Hall and Christchurch Gardens and close to Westminster Abbey and the Houses of Parliament.

JLL and Savills have been appointed as office agents; JLL is advising on the residential; Tuckerman and Savills are appointed to let the retail units. 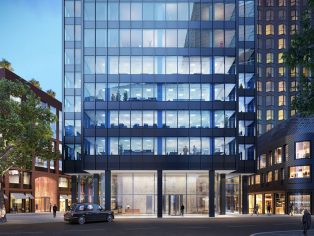