Andrew White of Metropolitan Infrastructure explains how the move to district energy taps into the growing need for energy efficient heating solutions.

Housebuilders and developers are under pressure to offer more forward-looking, energy-efficient heating solutions, rather than just the traditional provision of gas-fired individual boilers. Meanwhile, planning requirements demand that new developments be low carbon, fossil fuels are depleting, and renewables are playing an increasing role in energy supply as a means of reducing carbon emissions.

Heating supply is on the brink of a period of great change. Developers need to implement systems now that will be flexible enough to adapt to new technological developments and increasingly stringent planning regulations. District energy is such a solution.

What is district energy?

District energy, sometimes called district heating, is the name given to a network of pipes that efficiently delivers locally generated heat to a development. Traditional power generation normally produces heat as a by-product. This is often wasted however, being lost to the atmosphere. District heat networks allow for this by-product heat to be harnessed and delivered efficiently to connected homes and businesses. The use of one common plant, or energy centre, rather than individual boilers in each home or public/commercial building is far more energy-efficient, and is often more cost-effective. The homeowner or building manager is still able to control the heat input, and each customer is individually metered for the energy they have used.

District energy is a tried and tested technology, with more than 2,000 heat networks already operating in the UK. Indeed, the Institute for Public Policy Research (IPPR) has forecast that by 2030, heat networks could be servicing at least 10 per cent of the UK’s total heat demand. The urgent demand for new housing in the UK and the constant pressure to deliver it might tempt developers to stay with more familiar heating solutions, but district energy is a flexible, future-proof solution that offers them big advantages.

Following the 2016 UN Paris Climate Change agreement, the UK Government is committed to drastically reducing carbon emissions, and new planning regulations have focused on the need for low-carbon – and in London zero-carbon – development. District energy networks, which are commonly powered by Combined Heat and Power (CHP) engines, driven by natural gas or biomass, can provide a saving on carbon emissions of up to 50 per cent measured against traditional utility solutions. The energy efficiency savings are equally impressive, with networks generating electricity at 80 per cent efficiency compared to 30 per cent in the conventional UK electricity supply.

District energy networks can be implemented today using CHP plant, but once a network is in place, it can be adapted to take advantage of the latest innovations in heat generation. A wide range of alternative heat sources is being explored, including using waste heat from industrial processes; and using heat pumps to draw upon heat in rivers and sewers, or possibly the London Underground system. For example, we are working on the next phase of the King’s Cross development to deliver further carbon savings with fuel-cell technology, a highly efficient way of generating electricity, achieving 90 per cent efficiency with no particulate emissions.

District energy networks provide heat for both commercial and residential buildings. To be viable in the long term, a heat network needs to service the equivalent of at least 700-800 homes, but networks can be expanded over time. As demand grows with each new phase of a development, additional heat sources can be installed, making this a very flexible solution.

Heat networks are not just confined to new developments, with the retro-fitting of existing buildings possible as their current heating systems are renewed.

The energy-efficiency delivered by district energy schemes means that savings can be passed on to customers in the form of lower fuel bills. At King’s Cross, for example, customers’ heating costs are at least 5 per cent lower than they would be if the heat were provided by individual gas boilers.

A number of ownership models are available, from wholly owning a network to part-ownership through Energy Service Companies (ESCos) such as the one operating at King’s Cross. There the developer and utility network share ownership of the ESCo, which operates the district energy network and provides professional metering and billing services to the householder. The level of ownership and involvement that a developer wishes to retain depends on the level of long-term risk they are willing to accept.

How are networks operated?

The merits and long-term value of district energy networks are well-recognised and funding is available to support their implementation from both private and public-sector sources. Indeed, the UK and Scottish Governments have made significant loan funding available for projects that involve public-sector organisations through the Heat Network Investment Project (HNIP) and the District Heat Loan Fund (DHLF), and grants in Scotland through the Low Carbon Infrastructure Transition Programme (LCITP).

Major district heating networks have operated in the UK for many years (for example in Sheffield since 1988), and consequently a wealth of expertise and experience is now available to developers considering this technology. Consultancies and utility infrastructure providers can assist developers to formulate robust business plans, select the right network ownership model, and ensure that the district energy network will remain a valuable asset over its lifetime (which can be up to 60 years).

To sum up, district energy networks offer a way for developers to meet the demand for energy-efficient heating provision and make a demonstrable commitment to low-carbon development. At the same time, they have the flexibility to adapt to new technology as it becomes available, delivering a truly future-proofed heat solution. 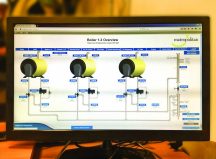