“Super-prime” developments are becoming more common in the capital, with the right location and spec attracting high prices – Jack Wooler reports on a recent example, Kingwood in Knightsbridge.

Kingwood is a luxury development in the highly sought-after area of Knightsbridge, a short walk from London’s Harrods. The premises is nearing completion, with only two of the ten apartments yet to be finished.

The property is the latest collaboration between owner Javad Marandi and developer Finchatton. Marandi purchased five townhouses on Hans Place and Herbert Crescent in 2011, partnering with Finchatton to design and develop the super-prime Knightsbridge scheme.

Overlooking Hans Place Garden, Kingwood is situated a stone’s throw from Sloane Street, London, famous for the luxury super-store Harrods, and a long list of boutique shops. The garden is often argued to be the most prestigious garden square in the Royal Borough of Kensington and Chelsea.

Arranged across four buildings, the development consists of five apartments and a duplex penthouse. Two of the apartments are located on the ground, lower ground and basements floors, with extensive living and entertaining spaces, offering three bedrooms and bathrooms. Three lateral apartments span across the first to third floors, each with five bedrooms and bathrooms. The three bedroom, four bathroom penthouse covers the fourth and fifth floors.

The design of the building draws from the detailed rose red brick facades which form the character of the Hans Place Conservation Area. Each of the four townhouses have a different pattern and detailing, their differences being key to their distinctive appeal. Bespoke bricks were made using CNC (computer numerical control) cutting technology, and then laid with precision and hand-rubbed in situ.

The design of the bricks, displaying circular hoops, is actually an abstraction of a coffee bean. Coffee beans were first brought into the UK from Jamaica by Sir Hans Sloane in the late 16th century, and his name is found throughout the area, with several streets named after him including Sloane Street and Hans Place.

The apartments enjoy south-facing views over the gardens of Hans Place, providing a communal garden to the international business executives and the super-rich. The space is just over an acre in size, and contains mature plane, chestnut and lime trees. Restricted to the public, the private garden is listed Grade II on the Register of Historic Parks and Gardens.

Being in Kensington and Chelsea’s Hans Town Conservation Area, any application to the local council had to take in to account the various regulations and guidelines. These requirements cover the many listed buildings in the area, views and vistas, the importance of gaps between terraces, environmental improvements, and much more.

In an area of London with such sensitive planning obligations, for Kingwood the whole process had to be handled carefully, with the developers in constant dialogue with both the council and planning consultants. As part of gaining planning permission, the front facade along Hans Place had to be retained, proving challenging from a construction and logistics point of view, considering that building was completely rebuilt on the inside. Permission was also dependant upon the integration of a contemporary mansard structure.

The planning application needed to evolve over time, with an opportunity arising at the beginning of the redevelopment process to purchase the adjacent building on Herbert Crescent. This necessitated further extensions and improvements to the original consent and scheme. As a result, the development was held up slightly while new permissions were sought. This delay proved profitable however, with the new scheme (which is as built today) allowing for more expansive lateral apartments to be created, with better floor plate design throughout the building.

In 2015, the Royal Borough of Kensington and Chelsea released its Basements Planning Policy, CL7. This requires that basements, among other things, ‘not exceed a maximum of 50 per cent of each garden or open part of the site,’ and ‘not comprise more than one storey,’ only providing exceptions to much larger sites. With basement permissions not being such an issue at the time of planning, Kingwood is lucky to be able to feature five floors below ground, providing space for the extensive amenities on site.

The building has been completely rebuilt and its interior exquisitely designed by Finchatton, as you’d expect in order to attract its high-end customer base. with bespoke touches exhibited throughout the grand rooms. While the interiors have been specified to the highest degree in even the smallest of places, buyers can choose to keep the properties as finished, or to completely replace everything. Items such as art, for example, are more dependant on personal taste.

Not stopping at luxury design, it is also in the amenities provided that residents will experience the high life. Amenities and services include a 24-hour concierge, a 1,300 sq ft gym with a separate functional training room, spa treatment suite, secure residents’ underground car parking, games and media room, and wine cellar, all housed in five subterranean floors.

Alongside the gym is a private residential fitness and wellness service, provided by one the most sought-after professional fitness teams in London, SP&Co, and its newly launched ‘BodySPace’. Kingwood residents have access to in-house, world-class fitness and wellness technologies, equipment, programmes and treatments, the like of which it is claimed have not previously been available in private residential developments.

Adding an extra element of class to proceedings, Kingwood has introduced a fully-equipped professional catering kitchen for owners’ use when entertaining, which is serviced by a separate staff lift direct to each principal apartment, along with a dedicated chauffeurs’/staff restroom.

Specifiers are increasingly introducing smart technology into developments of this sort to optimise convenience and efficiency. With Finchatton’s super-prime specification, smart features were taken to the next level. From remote controlled, end of bed TV lifts, to smart windows that can be opened, locked and covered with blinds at the push of a button, Kingwood apartments offer the cutting edge of technology. Smart heating and lighting are also integrated across the properties allowing for seamless home automation and control.

Danielle Joyce, senior designer at Finchatton, explained the design philosophy behind the finished result residents will enjoy: “Kingwood is orientated around the views over Hans Place Garden and focused on enabling as much natural light to reach key spaces. Hence the floating tread staircase in the Penthouse and the double height roof light above.”

She described the development as “21st Century living behind the facades of what were 19th Century townhouses.”

The properties range from a still eye-popping £21m, up to £31.5m, but some of the leases are already agreed. Only two apartments are yet to be finished, with both due for completion this month. 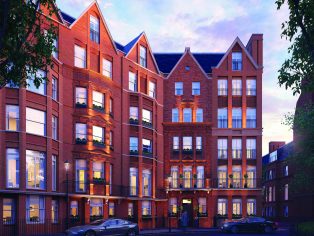 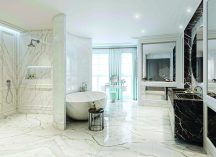 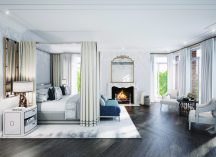 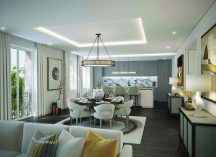 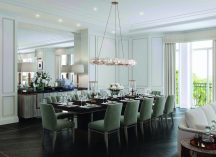 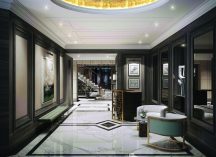