A beloved style of home that is now part of the fabric of the Scottish capital has been given a modern twist at a new development at Leith’s waterfront.

First built in 1850 and widely recognised as a defining feature of Edinburgh’s architectural history, colony houses in areas such as Stockbridge and Haymarket are some of the most sought-after homes in the capital – known for their community feel and innovative use of space.

Taking inspiration from the traditional design, the homes at Waterfront Plaza will offer a contemporary approach, with open plan living areas and large windows creating bright and inviting spaces that will suit a variety of buyers.

The ground floor comprises of a three-bed apartment with the second and third floors of that apartment’s footprint split between two duplex two-bedroom plus study properties. The colony layout and external staircase allows each home to benefit from its own front door.

“The clever layout means that each home has its own front door, creating that sense of ownership and community that has made the housing model so popular.

“We’ve been able to take the best elements of the design and modernise them, to ensure they meet the needs of families in 2019, with features such as open-plan living spaces.”

The characteristic external staircase leading to the upper-level homes are famed for being sociable spaces in the established colony communities of Edinburgh. These new homes feature these staircases, providing buyers with an attractive area that can be personalised with planters and ornaments.

The outside space is bolstered further with a private top floor terrace for the owners of the upper homes. Many of the colonies will also benefit from a south-facing outlook and views that extend over Leith’s famous dockyards.

Philip Hogg, Sales and Marketing Director at CALA Homes (East), said: “Credit to the planning and architecture teams for choosing to bring a modern interpretation of such an intrinsically Edinburgh housing concept to our Waterfront Plaza development.

“The colonies have taken inspiration from the original model but the open plan interiors and large windows create the spacious and bright interiors that feature across CALA developments.

“The homes will be fronted by private gardens that lead onto the development’s public realm, fostering a great community environment.

“We expect the colonies at Waterfront Plaza to attract a great deal of attention and encourage buyers who are considering their next home to register their interest to avoid disappointment.”

Located in the historic port of Leith, the new homes will benefit from nearby Michelin starred restaurants and vibrant bars situated along The Shore, as well as a host of independent shops and boutiques.

With Ocean Terminal on its doorstep, the development is in easy reach of a range of leisure facilities – including restaurants and a gym – as well as the famous Royal Yacht Britannia.

Regular bus services and nearby cycle paths provide convenient access to Edinburgh’s city centre, and the city bypass is in easy reach, proving access to the M8 and M9, as well as the A90. 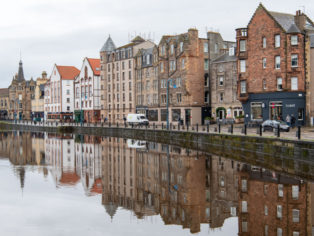