A leading housebuilder in Wales has today praised the success of the Government’s Help to Buy Wales equity loan scheme as it celebrates its first ten months claiming the scheme has seen hundreds of people buy a new-build home in Wales.

Persimmon Homes Wales said the scheme had especially helped people setting off on the property ladder. The company revealed that 67 per cent of those who took up Help to Buy Wales were first time buyers, many of whom had feared they would never raise a large enough deposit to get them on the property ladder.

Under the scheme, people buying a new-build home only need a five per cent deposit along with a 75 per cent mortgage while the Welsh Government supplies a 20 per cent equity loan, which is interest and repayment free for the first five years.

Since the Help to Buy scheme was launched in January, 724 homes sold have used the scheme, with Persimmon Homes and sister company, Charles Church, contributing 197 of those sales, a 27.2 per cent market share.

From a total funding pot of £170m, Help to Buy Wales Ltd has spent £25.2m, and has so far helped people all across the country, not just in the large cities, with a good spread across South, West and North Wales.

The latest figures also reveal the average age of a purchaser in Wales taking up the scheme is 30 years old, spending an average £177,443 on a new property.

Persimmon Homes Wales believes the scheme has had incredibly positive impact and is working with the Welsh Assembly Government, Ministers Carl Sargeant and Lesley Griffiths, to promote Help to Buy further.

“There’s no doubt that Help to Buy Wales has been a resounding success so far, we’re getting people on to the housing ladder and helping them to achieve their dream of owning a brand new home,” commented Huw Llewellyn, managing director at Persimmon Homes West Wales.”

“Significantly, the scheme has opened the doors for first-time buyers desperate to buy their own home and live somewhere that is truly theirs.”

“Help to Buy Wales has boosted confidence for all builders across Wales and as more new homes go up it is helping to bridge the gap between supply and demand, as well as creating significant employment opportunities and economic growth in the country.”

“It has certainly kick-started more housing construction projects for Persimmon Homes, with new developments in the pipeline for Carmarthen, Crosshands, Swansea, Llantwit Major and Rhoose in the very near future.” 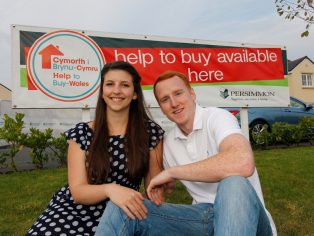