Larkfleet Conference debates the future of housing and economic growth

Around 100 local political and business leaders attended this year’s Larkfleet Conference to talk about housing and economic development in the region surrounding Peterborough in an area stretching as far afield as Cambridge, Milton Keynes and Oxford.

This year’s annual event focused on plans for the ‘Oxford-Cambridge Arc’, a government development plan which covers Peterborough. It could include one million new homes by 2050 as well as all the supporting transport, communications and economic infrastructure.

The conference was organised by the Bourne-based Larkfleet Group of Companies which includes developers Larkfleet Homes and Allison Homes.

There was also a presentation by Simon Evans, smart homes director of Larkfleet Homes, talking about developments in housing technology as the industry seeks to provide more energy-efficient homes for the future.

The event was chaired by Lord Taylor of Goss Moor. He told the conference:

“We should not be developing new homes that do not meet future standards. The houses we build now will still be around in 50, 100 or more years.

“We need to think about what sort of community we want in that sort of timescale. This is an amazing and exciting opportunity.”

“This is an area of enormous economic potential, but we need the right kind of houses in the right places or the economy will decline. If people cannot afford to live here, they will go elsewhere.

“This is a once-in-a-generation opportunity to shape the future.”

Mayor James Palmer stressed the need for investment in skills as well as housing and jobs. He said that garden villages, creating sustainable new communities, would be the key to delivering the ambitions for the Cambridge-Oxford Arc.

The Larkfleet Conference was held at the Great Northern Hotel in Peterborough on Thursday 13 June 2019. 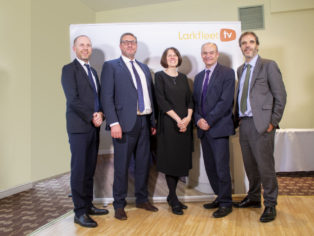