One of London’s most successful residential schemes has reached a landmark stage in its development. Southbank Place, a joint project between Qatari Diar and Canary Wharf Group, has now successfully sold nearly 90% of its apartments, reaching a total sales value of £593m.

Situated in a prime position on the South Bank, surrounding the Shell Centre building, the full development; which sits across five residential buildings, first launched in September 2015, with 416 residential apartments sold to date. The development will include a new public square, in addition to more than 530,000 sq. ft. of office spaces and 48,000 sq. ft. of retail, leisure and hospitality space.

The development’s first building, One Casson Square, is in the final stage of sales, with 89% of all apartments now sold. Award-winning design house Johnson Naylor have created carefully considered interiors that create calm, yet contemporary apartments, with an emphasis on natural light and maximising views. The building, designed by Squire & Partners, has been named after the British architect, and former director of the South Bank’s Festival of Britain, Sir Hugh Casson.

Belvedere Gardens, the site’s latest and most exclusive phase, pays homage to the 1951 Festival of Britain, with the Festival’s emblem, the ‘Festival Star’, embossed and debossed across the façade and a deep bronze colour also echoing the nearby Palace of Westminster. Superbly designed by GRID Architects and Goddard Littlefair, the apartments face Jubilee Gardens, with floor-to-ceiling windows revealing river views of London’s most recognisable landmarks.

“The popularity of Southbank Place is proof of the hard work being put in to deliver what will be one of London’s landmark addresses. With onsite amenities including an exclusive health & fitness centre, shops, restaurants and bars, coupled with an enviable location on the South Bank, the development is becoming a go-to destination.”

“With the new Waterloo Station entrance set to open this summer, we will begin to see the development really open up to the public in the next few months. It is our work not only on the residential buildings, but within the public realm as well, that will leave a lasting legacy on this wonderful area of London.”

Situated between Waterloo and County Hall, with Westminster a short walk over the River Thames, Southbank Place is arguably one of London’s best located developments. Residents will enjoy excellent transport links including a new entrance into Waterloo Station with access to the Jubilee, Northern and Bakerloo lines, as well as rail services to the South and South West of England. The Development is also a stone’s throw from some of the city’s best-known attractions and landmarks, as well as theatres, art galleries and fine dining, which all can be found along the South Bank.

“Southbank Place has had an incredibly successful sales rate. There continues to be a strong demand for riverside homes, especially ones that deliver iconic views and provide easy access into the City, the West End or Canary Wharf; of course Southbank Place delivers on both. The development has proved popular with owner-occupiers and investors alike, who want to take advantage of the site’s fantastic location, exceptional local culture and transport links.”

“The apartments on offer at Southbank Place are distinctive to this area of London. Each building has its own unique character, yet each offers world-class design, beautiful interiors and exceptional residents’ facilities. The scheme has been incredibly popular since its launch in 2015 and we are now in the final stages of sales. We are now focusing on the development’s few remaining apartments, which we expect will be tied up before the site completes next year.” 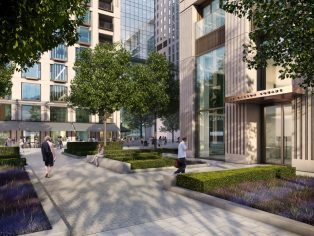