John McAslan + Partners’ proposed scheme for the 32-storey Millbank Tower was granted planning approval at committee on Tuesday 12 April 2016. The proposal will comprehensively refurbish and enhance the Grade II listed building, securing its long term future as an important heritage asset. Comprising 207 apartments, predominantly one and two bedroom residential units, but providing some family-sized apartments, the project also includes a 150-bedroom hotel, as well as public realm, public gardens and a private landscaped garden for residents to the rear of the site.

Close to Tate Britain, the scheme will also support Westminster Council’s Strategic Cultural Area designation, with the addition of a new cultural facility located at the southern end of the podium.

The project has been developed through successful dialogue with statutory authorities and the local community. The urban context for neighbouring residents will be significantly improved, removing the existing multi-storey car park which will be replaced with new landscaped gardens.

“Our proposals will secure the long term future of this remarkable 20th-century building and we are delighted that Westminster Council has granted planning permission and listed building consent for its conversion to residential use.”

“Completed in 1963 to designs by Ronald Ward & Partners, the Tower is one of London’s most significant 20th Century buildings. The tower, the tallest building in London until surpassed by the G.P.O Tower in 1965, features high quality glass curtain walling which will be replaced with an exact facsimile. Millbank Tower was the first UK building to employ projecting stainless steel mullions – this is a very exciting opportunity for the practice to refurbish such an innovative and sophisticated building.” 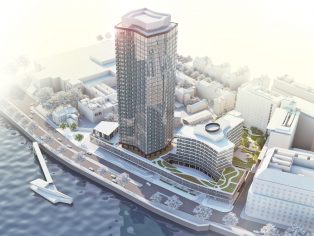