The six-storey 1960s building sits on a 1.27-acre site and consent has been obtained for a 184-unit residential scheme comprising high specification studio, one and two-bedroom apartments.

Located on Warren Road in the sought-after Greater Manchester suburb of Cheadle Hulme, the scheme is Inspired’s first in the north and has an estimated GDV in excess of £25m.

The deal was introduced and backed by Cheshire-based property investor Sanjay Shah, owner of local property company Mirasa Limited, together with his co-investors.

The 7,614 sq m (81,956 sq ft) building was last occupied in early 2011 by engineering consultancy Simon Carves Limited and had been earmarked for redevelopment by Stockport Borough Council. It sits conveniently for commuters just moments from Cheadle Hulme railway station, with direct trains to Manchester Piccadilly in just 16 minutes and Stockport in only six minutes. Additionally, Manchester Airport, now boasting direct flights to China, is only around 10 minutes’ drive away by car and is home to the new £800m Airport City Manchester development and its £130m ‘China Cluster’, set to be the UK’s first airport city and a leading business hub in the region.

Construction is expected to commence in early Summer 2017.

“Our strategy has always been to pick areas undergoing significant regeneration that are affordable to young professionals and have great transport links. With strong rental growth predicted in Manchester over the next five years, yields above five percent and government support through the Northern Powerhouse agenda, Manchester has become a hotspot for both UK and overseas investment, while the £800m Chinese-backed Airport City scheme will create a new business hub less than five miles away from our development.”

“I would also like to take this opportunity to thank my friend Sanjay Shah who was instrumental in getting this deal over the line. Without his timely intervention in resolving difficult issues at the most critical moments, where the deal could have fallen through, there is little doubt that Inspired would not have been able to secure this development opportunity in the heart of Cheshire. We hope to complete many more purchases with his assistance in the future.” 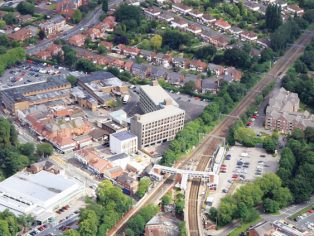