The government’s 2016 nearly zerocarbon target for new homes has pushed energy efficiency to the top of the agenda for housebuilders. Rising energy costs have also meant that potential homeowners are more concerned than ever about reducing their household bills.

To help housebuilders meet growing legislative demands and consumer expectations of cost effective, highly efficient homes, the level of innovation in the glazing technology sector has accelerated considerably over the last decade.

Regulations specifying minimum requirements for the energy efficiency of new buildings are being gradually tightened and, at the same time, a growing emphasis is being placed on the importance of improving existing housing stock.

In response, technical advances mean housebuilders can now call on products such as double glazing units with low-emissivity coated glass that can deliver the same thermal efficiency as uncoated triple glazing.

Solar control coatings can slash the amount of solar energy entering a building, for example, reducing the need for power-hungry air conditioning in properties that are susceptible to overheating during the summer.

Conservatories and rooms with large, southfacing windows, as well as buildings in hot climates, can be especially prone to this issue. As more buyers prioritise energy efficiency when choosing a home, it’s time for housebuilders to familiarise themselves with the issues and potential solutions.

The race to cut energy bills

Despite the fact that unusually warm weather meant British homeowners used 14 per cent less energy during 2014, their energy bills continued to rise, with households paying £15 more for their electricity, which saw the average yearly bill reach £592, and £23 more for gas, at £752 per year.

As much as 25 per cent of the heat from homes escapes through the windows and, according to the Energy Saving Trust, installing energy efficient glazing in the average A rated detached home will save £120 to £160 a year through reduced energy bills.

Energy efficient homes are also more highly prized by buyers, and hence more saleable with potentially bigger margins for developers. Department of Energy and Climate Change research found that homes with energy saving improvements commanded a premium of up to 38 per cent in some parts of England, indicating that energy efficiency is now a key factor influencing the sale price of most residential dwellings.

From part of the problem to the solution

Glazing has an important role to play in achieving modern efficiency expectations, as a significant proportion of heat loss from the typical house occurs through windows, glazed doors and conservatories.

Homeowners also benefit from the peace and quiet that comes with better noise insulation, fewer draughts and cold spots, and reduced condensation build-up on the inside of windows.

Even triple glazing units, which have so far rarely been seen in the UK outside of specialist eco projects, are increasingly being used to meet ever more stringent performance requirements.

But, despite its performance advantage over many double glazing units, triple glazing isn’t always suitable. Units tend to be more expensive, bulkier, heavier and they require deeper frames than double-glazed equivalents.

It’s not surprising then that so many housebuilders instead favour the new generation of ‘super’ double glazed units. Innovative glass manufacturers have developed special low-emissivity coatings which can give double glazed units the thermal efficiency of triple glazing.

By combining two low emissivity coatings together, today’s best double glazed units can achieve a U-Value as low as 0.9W/m2K, previously only achievable with triple-glazing. Ultra-thin glass products have also come on to the market that use a vacuum rather than air or argon gas between two panes.

These achieve a similar energy efficiency performance to a high performance doubleglazed unit, but in an even thinner profile.

See this feature in the June issue of Housebuilder & Developer here
To see the other features in this issue, visit the Magazine Archive 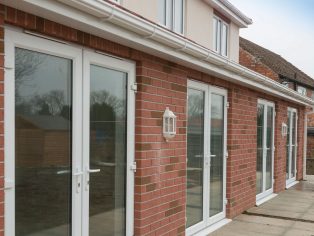 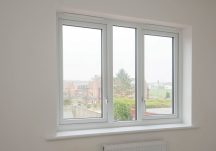