Infrastructure of epic proportions: an interview with Sir Terry Morgan of Crossrail

Europe’s most significant infrastructure project, Crossrail, is delivering the Elizabeth line, the first complete new underground line in more than 30 years, and will include ten new stations.

This immense project is set to increase rail capacity for central London by over 10 per cent, meaning quicker journey times and cutting congestion at the many critical points across the network.

The man at the helm of Crossrail is the Chairman, Sir Terry Morgan CBE, who will be joining London Build 2018 on 24th October for our Future London Summit.

We caught up with Sir Terry to get an insight into the progress made, the main highlights, and what the Elizabeth line means for London, but we began by asking what his role entails:

“I joined Crossrail Limited as Chairman in 2009 and have been with the programme through its various critical stages including tunnelling and major civils as we work to deliver the Elizabeth line. This has been an infrastructure project of epic proportions. It has been made possible thanks to the skill and dedication of everyone involved ranging from those on-site through to suppliers from every corner of the UK.

“A huge priority for me has been apprenticeships and vocational training. Investment in skills and training is essential, not just in the delivery of the Elizabeth line, but also the next generation of infrastructure projects.

“Our commitment to creating quality learning and career opportunities for young people along with the establishment of the Tunnelling and Underground Construction Academy in Ilford has made a huge contribution towards revitalising our infrastructure skills base.”

What is the latest update regarding the completion of Crossrail?

“Construction of the Elizabeth line is now in its final stages. Testing of new trains and infrastructure is underway and continues alongside the remaining fit-out of the stations. Later this year, the first completed infrastructure will be handed over to Transport for London, who will lead the trial operations phase.”

What have been the most significant challenges and successes?

“The construction of the Elizabeth line through the heart of London has been one of the most challenging and complex infrastructure projects ever undertaken in the country. A huge achievement was the successful completion of 42km of rail tunnels using eight tunnel boring machines in just three years while challenges have ranged from worse than expected ground conditions at some stations through to the renovation of a disused Victorian tunnel under the Royal Docks in east London.”

What will Crossrail mean for the economy?

“The Elizabeth line will redefine transport across London and the South East with quicker, easier and more accessible journeys.

“Stretching from Reading and Heathrow in the west across to Shenfield and Abbey Wood in the east, the Elizabeth line will change the way people travel and add much needed new capacity to London’s transport infrastructure. A fleet of brand new 200 metre long trains will run on the Elizabeth line, featuring nine walk-through carriages, air conditioning, CCTV and real-time travel information.

“When fully complete, the Elizabeth line will carry over 200 million passengers per year adding 10 per cent to central London’s rail capacity. The new railway will bring an extra 1.5 million people to within 45 minutes of central London.”

How has the delivery of Crossrail affected the construction industry?

“The Crossrail project has needed the very best UK materials and expertise in civil engineering, design, manufacture and systems technology.

“Ninety-six per cent of contracts for the Elizabeth line have been awarded to companies based within the UK, supporting the equivalent of 55,000 full-time jobs, 62 per cent of which are outside of London.

“The project has seen thousands of highly-skilled engineers working at the cutting edge of new infrastructure and technology and has created more than 1,000 apprenticeships, equipping the next generation with the vital training and skills needed to secure the UK’s future.” 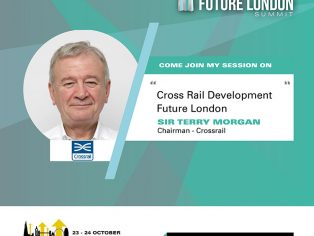