The Boiler House and Material Store represent the latest phase to be announced of the £250m redevelopment of the site of the former HMV/EMI record factory in Hayes, west London.

The first phase of Cathedral and Development Securities’ multi-phased regeneration scheme; the 132 home Gatefold Building being brought forward by a partnership between Invesco and Willmott Dixon, is already under construction.

The 17-acre scheme, one of the largest regeneration projects in west London, will create a new community hub with more than 630 homes and 750,000 sq ft of commercial and leisure space – including a 7-screeen multiplex cinema, museum, restaurant complex, shops and bars.

Alongside this, the redeveloped 100,000 sq ft Record Store building will become the home of the Central Research Laboratory. Inspired by the industrial heritage of the site and scientific advancements made by the EMI Central Research Laboratories, this will be the UK’s first full-service incubator for hi-tech manufacturing entrepreneurs combining research and development space with commercial training, mentoring, a small-batch production facility and seed-funding.

HUB plans to re-submit detailed plans for both sites in the coming months. Retaining the incumbent award winning architects Studio Egret West and Duggan Morris, HUB will tune the residential product in line with their focus on simple, high quality design and intelligent use of space.

The purchase will be the third by HUB, which was incubated by the founders of Squarestone in late 2012 as a developer of much needed mid-market housing in London. It will join a development pipeline of over 500 new homes in developments in Acton and the Royal Docks.

Benefitting from the planned Crossrail connection at Hayes and Harlington station, the Old Vinyl Factory master plan was granted planning consent by the London Borough of Hillingdon on 19th April 2013, and is expected to generate 4,000 new jobs by 2022.

“The Old Vinyl Factory is very close to our hearts at Cathedral Group for many reasons, and we are delighted to bring a company with HUB’s experience and reputation on to the project’s delivery team. Since we and our partners at Development Securities first acquired the site in 2011, we have taken great care to rediscover its past as well as make great plans for its future.”

“Cathedral’s redevelopment of the Old Vinyl Factory is exactly the kind of scheme that we are proud to be part of – regenerating a classic part of London’s history, with a development that will give a huge amount back to the local community and London as a whole.

“What London needs is more projects like this, demonstrating close working between local residents, local authorities and developers, bringing to the market much needed high quality homes and creating interesting new places where people want to live.”

“HUB’s third scheme will be another major contribution to much needed housing for London workers that politicians are pushing hard to bring forward. The Old Vinyl Factory site is a hugely ambitious regeneration project that promises great things for west London.

“Improving transport links continue to enable more investment to be unlocked within the donut around London’s centre and together with HUB’s Acton scheme with M&G, this project marks a sizeable contribution being made to vital new housing.” 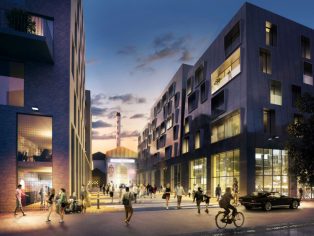