The scheme, named Hoola, and located at the head London’s Royal Victoria Dock, received unanimous consent from the London Borough of Newham late on Tuesday night.

The 24 and 23 storey towers have been designed by CZWG Architects LLP, renowned for their expertise in delivering regenerative residential developments in London.

The submitted plans for the 0.5-acre site have focused on simplicity, robust quality and building a sense of community in their design, as part of HUB Residential’s aim to improve the standard of mid-market housing developments in London.

The design has maximised internal space for all of the homes, and allowed access to balconies, while shared facilities will include a residents’ lounge, gymnasium, and a business lounge, while the landscaping for the site will incorporate communal gardens and play spaces. The landscaped ‘hill’ on which the towers and gardens are based will conceal car parking and cycle spaces.

External green and blue roofs have also been developed to manage surface water run off and storage, while energy sharing agreements with nearby landmarks have also been agreed.

The area around the Royal Docks is set to undergo significant regeneration in the coming years, with ABP set to invest £1 billion in the new Asian Business Port at the nearby Royal Albert Dock, while the completion of Crossrail in 2018 will bring the area to within ten minutes of Central London.

Construction is scheduled to begin in Mid-2014, with Carillion appointed as contractors earlier this year, with all homes developed for the middle-income price bracket.

The plans for the Victoria Square scheme, which rises to 16 storeys at its highest point and contains a number of accessible roof gardens, including allotments and play space, were passed unanimously by the London Borough of Ealing’s planning committee.

The development will provide 152 new homes in a community orientated development of one, two and three bedroom apartments, with construction scheduled to begin later this year.

HUB Residential was created by Squarestone in early 2012, with a focus on design-led, community orientated mid-market residential development in London. The first two developments means HUB now has over 400 homes in the pipeline, with a combined GDV of over £200m.

“We are delighted to have received consent from the London Borough of Newham for our landmark Hoola development. We see the current regeneration going into Royal Docks area making a new eastern hub in the capital – and we are excited to be part of that.

“To help support that regeneration, we believe new housing should be customer driven, reflecting both the aspirations and price points of workers in London. A new model and standard for home design in the capital needs fresh thinking and ideas at every stage of the process.” 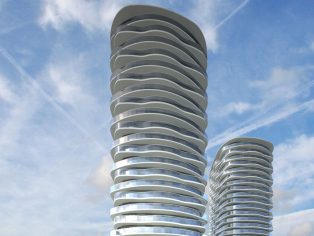