How confident are UK property investors in the Conservative government?

The past decade of British politics has been characterised by one theme: change. Compare this period to the 2000s under the leadership of Tony Blair and Gordon Brown, which saw successive parliamentary victories for Labour, and that motif seems even more obvious.

Confronted by political disunity, the UK voted overwhelmingly in favor of a Conservative government in the 2019 General Election, resulting in a decisive victory for Boris Johnson and the beginning of a new era in UK politics. Indeed, with Boris Johnson winning the largest Conservative majority since 1987, the chance of a general election occurring before the Government’s five-year term has ended is extremely low.

For investors, this has been largely received as good news. The real estate sector has struggled amidst a prolonged period of political uncertainty, with investors holding back on major acquisitions and calling for greater leadership and clarity over how Brexit will be managed. For now, the General Elections seems to have provided the breakthrough many were calling for – meaning that the Government can address some of the pressing issues facing the country.

In a bid to understand property investor sentiment towards the Government, FJP Investment recently surveyed 750 UK property investors to uncover their attitudes towards the different policies and reforms the Conservative party are looking to introduce during its current term in office.

Confidence in the UK Government’s approach to property

The results were fascinating, with the majority of investors in favour of many key policies promoted by Boris Johnson et al in the run-up to the general election in December 2019. Of these, the FJP Investment study found that 70% of investors are in favour of the Conservative party’s proposed a 3% stamp duty surcharge for non-UK property buyers. A somewhat controversial reform, the move is partly designed to support domestic buyers of UK property and feeds into the broader narrative of the housing crisis. With demand outpacing supply, the construction of new builds will play an important role in addressing the housing crisis and issues of affordability. However, simply putting up new builds that are unattractive or poorly finished will not solve these problems. That is why the government is also planning to give local residents more say in the style of new developments in their area – something that 68% of property investors support. Three-fifths (60%) of investors also support banning the sale of new homes as leaseholds.

Taking a step back and looking at Boris Johnson’s plan for the wider economy, sentiment is similarly positive. For example, 59% would be happy to see income tax rates frozen over the next five years, while a similar number (54%) support not seeing capital gains tax being raised between now and 2025.

The FJP Investment research also revealed areas of concern from the perspective of investors. Most fundamentally, there are fears that Brexit is taking the front seat to the detriment of necessary policy change. Almost three fifths (58%) of those asked said the Government is ignoring important domestic issues in favour of Brexit. With issues such as homelessness, climate change and the housing crisis requiring a huge amount of joined-up action to be combatted effectively, it is important not to let Brexit overshadow such pressing national challenges.

More specifically, investors do not believe the government is going to hit its hugely ambitious housebuilding aim of one million new homes being added to the market by the mid-2020s. 61% of those FJP Investment surveyed expect that the target to be missed. This skepticism is understandable, as all governments in recent memory have set ambitious housing targets.

Those asked also expressed doubt over whether the government would even be able to effectively deliver Brexit. Indeed, two fifths (41%) of respondents thought that the UK would not leave the European Union at the end of January. This amounts to a lack of confidence from some investors in the country’s leadership, as delivering the secession is Boris Johnson’s main priority.

As such, the attitudes property investors toward the new government is very much a mixed bag. On the one hand, they feel that Boris Johnson has prioritised the right kinds of property policy. With the growing need to increase housing supply, the plans to reform stamp duty for foreign buyers has been particularly well-received.

However, this positivity does not translate into a huge amount of confidence. Many are uneasy with the highly ambitious new housing target aim, and even skeptical as to whether the government will be able to deliver Brexit. With the market still in a state of flux, I hope that the Government exceeds these expectations and follows through on its claims. For now at least, I look forward to the 2020 Spring Budget on 11 th March – the perfect opportunity for Boris Johnson and his cabinet to lay down their vision for the UK.

Jamie Johnson is the CEO and Co-founder of FJP Investment. 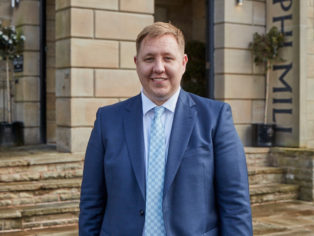