The results from the consultation on the future management of Hackney Council’s social housing have been received, with the majority of tenants backing the proposal to return management to the Council.

With the Decent Homes programme coming to an end next year and the current housing management agreement expiring on 31 March 2016, the Hackney Homes Board and Hackney Council agreed that this was the right time to review the future plans.

The three month consultation, which closed on 31 October, asked Hackney Homes’ introductory and secure tenants and leaseholders to have their say on the joint proposal, which would see management returned to the Council in April 2016.

Independent research agency Ipsos MORI has reported a response rate of nearly 20% (6,158), of which 56% showed support for the proposal, 14% opposed, 15% neither supported nor opposed, 12% answered ‘don’t know’ and 2% did not state a preference.

“The Council and Hackney Homes value the views of our residents and we are pleased that our recommendation has been agreed by them and that so many took the time to let us know their opinion. We would like to thank all those who completed and returned their questionnaires.”

The Council’s Cabinet will consider the outcome of the consultation together with other factors in order to make a decision about the future of the housing management functions in January 2015. 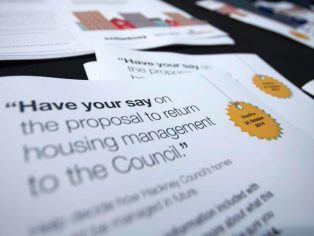