A trainee joiner, assistant buyer and sales advisor from West Yorkshire have been shortlisted for a national housebuilder’s Young Achievers award.

Harrison Tucker, Alexandra Hope and Thomas Merry have each been recognised for their hard work and dedication by Persimmon Homes West Yorkshire and will represent the region in the national finals, taking place on 24th October.

The three trainees will each represent a different award category and will compete against their equivalent counterparts from 23 other Persimmon regions to claim the Trainee of the Year accolade.

The inaugural Young Achievers award programme was launched by Persimmon Homes earlier this year to showcase its apprentices and sales trainees who have gone above and beyond to succeed in their role.

“We manage a robust apprentice programme taking more than 100 young people into the business nationally each year.”

“We feel it is important to reward those youngsters who have got off to a flying start and Harrison, Alexandra and Thomas are perfect examples of this.”

Harrison joined Persimmon in September 2014 and embarked on a carpentry and joinery apprenticeship. During his first year, he has displayed a natural skill in the industry both onsite and at college, where he has consistently achieved A and B grades for his work.

Alexandra only joined the sales team in February this year and has already exceeded the sales expectations of a trainee. Her thirst for knowledge and drive to succeed has been recognised in her results.

Assistant buyer, Thomas, joined the business in November 2012 and has maintained a mature and professional approach while being a notable supportive team member. Combined with his composed attitude to increased work load, Thomas has comfortably taken on greater responsibilities.

“It wasn’t easy choosing the individuals to best represent our region. However, we feel that Harrison, Alexandra and Thomas are shining examples of our future workforce and are well on the road to forging successful careers in the construction sector.”

“Harrison has shown excellent commitment and passion in his first year, whereas Alexandra has embraced the role which is evident in her results. Thomas’ calm and studious approach has allowed us to progress his responsibilities much sooner than we would expect.”

“We would like to wish them the very best of luck in the finals, but to us they are already winners.” 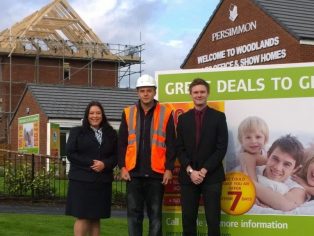