Leading housebuilder Persimmon Homes has today announced the appointment of its 100th ex-military recruit as part of its Combat to Construction initiative.

Craig Payne joins Persimmon’s North Midlands operating company as a bricklayer. He is a former Lance Corporal in the Worcestershire and Sherwood Foresters and since joining the British Army in 2001 has served across the UK, Kenya, Canada, Belize, Northern Ireland and Afghanistan.

Persimmon launched Combat to Construction last autumn with the opening of a dedicated training centre in Darlington. The initiative trains ex-service personnel to be bricklayers and joiners. Such has been the success of the programme; the company is now working with training partner Nordic Focus Training to open a further centre near London which will officially launch in June.

The news of the 100th appointment comes in the same week that the housebuilder announces its total employees has now exceeded 4,000. This number includes 500 trainees and apprentices across the group. At the end of the recession, the business employed 2,300 people.

Jeff Fairburn, Persimmon’s group CEO, said demand for new housing remains high and the recruitment of excellent people to join the business is a priority.

“Persimmon was established over 40 years ago as a family business. Although we have grown significantly over the years, these family values remain pivotal to our success.

“The 100 ex-service personnel now working for Persimmon have brought a wealth of experience to the company and our objective is to bring in hundreds more before the close of the year.  Indeed, I’m delighted to announce that we have had a further 40 service leavers join us in other roles within the business in the last year.

“Alongside creating bricklayers and joiners, we are now extending the initiative to train specialist installers for our Space4 timber frame operation at developments across the UK. 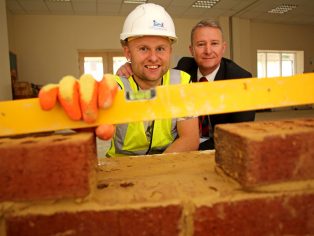