House-hunters in the East Midlands have been rushing to seal a deal before the General Election, according to Bellway.

Purchasers with a close eye on the market are keen to act quickly in response to widespread predictions that prices will rise later this year.

“The early part of an election year can be a difficult time for housebuilders, but this year has started phenomenally well.

“House prices in the East Midlands have risen steadily since the recovery began but without the sharp increase in values recorded in neighbouring regions.

“This makes the East Midlands an attractive place to buy for two reasons – the market is steady with no hint of a housing bubble. Also, buyers stand to gain if the experts are right and price rises are set to gather pace.”

“Buyers remain cautious in the wake of the recession, so value for money is at the top of every wish-list. The nature of the East Midlands market ticks this box right now.

“The mortgage market is also more attractive than it has ever been. Fixed rate deals are available at less than three per cent and there’s now talk of cuts in interest rates as well as rises.

With Help to Buy you can purchase a new home with a five per cent deposit and a 75 per cent mortgage. The remaining 20 per cent is provided as an equity loan backed by the government which is interest-free for five years.

Bellway East Midlands is based at the Meridian Business Park in Leicester. The division currently has 18 developments, offering everything from one-bedroom apartments to five-bedroom houses at a diverse range of locations across the region.

Bellway released its half-year trading statement earlier this month, which showed that reservations and average prices were up across the country. 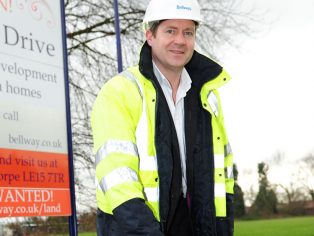