Staff at a leading construction firm waltzed the night away to raise £15,000 for a military charity.

A fantastic £14,691.43 was raised from the entrance fee, a raffle and donations, which will be donated to Alabare.

The charity supports servicemen and women across the UK who have served in the Armed Forces and are experiencing difficulty adjusting to civilian life.

Alabare’s Homes for Veterans project helps the ex-service personnel gain the skills and confidence they need to move into their own accommodation.

“We had a fantastic night and we are delighted to raise such a huge sum of money for Alabare.

“It’s a fantastic charity. In Wales they are focussing on the needs of vulnerable, homeless ex-service personnel with a goal of setting up 140 bed spaces within the next two years.

“Persimmon Homes is committed to helping the country’s heroes and recently announced the appointment of its 100th ex-military recruit as part of its Combat to Construction initiative.

“We’re really proud to be making a difference.”

The dinner dance, which took place on June 13, started with a drinks reception followed by a three-course meal.

There was a raffle with prizes including a weekend away to London, spa treatments and gift vouchers.

Entertainment was provided by Ultraviolet, who have performed with the likes of 10CC, Brian May, Will Young and Joy Division.

“It was a really enjoyable evening and we are delighted to receive this generous donation from Persimmon Homes, which will really help with the work we are doing in Wales.”

Persimmon Homes has developments across south east Wales, including in Barry, Newport and Pontypridd. 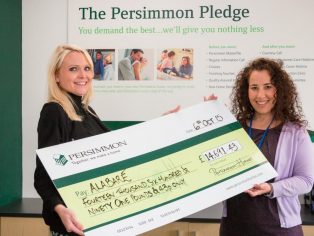