Hill, the award-winning top 20 UK housebuilder, has unveiled plans for 107 new apartments as part of the North West Cambridge Development by the University of Cambridge that will in total create 3,000 new homes.

Valued at over £60 million, the project is another major milestone for Hill, who received planning approval to build the first 240 new homes at the North West Cambridge Development in November 2015. North West Cambridge is currently one of the largest residential developments in the City of Cambridge and will see the creation of a new community of 3,000 homes with a new primary school sponsored by the University, doctor’s surgery, a supermarket and a hotel, alongside university research buildings and student accommodation.

A landmark site within North West Cambridge Development
Hill’s latest plans will see 107 apartments occupying a landmark position within the development. Located on the site’s main thoroughfare, Eddington Avenue, the new development is adjacent to the vibrant spaces of Market Square and Community Square, which will be home to a new high quality hotel and a wide selection of shops, cafes, bars and restaurants, while also overlooking Storey’s Field cricket pitch and the parklands beyond.

Designed by Pollard Thomas Edwards Architects, the unique development will feature a large area of green outdoor amenity space on the upper floors, with views across Cambridge.

A planning application for the Eddington Avenue site will be submitted later this year, with construction expected to start in summer 2017. The development will be overseen by Hill’s new Regional Director David Eardley, who was appointed by Hill in December 2015 to oversee the housebuilder’s major residential projects.

“The North West Cambridge Development will contribute to the long-term success of the City and the University. The partnership working amongst the University team with the local authorities and developers, alongside the commendation from industry professionals, is a positive endorsement that the project will deliver real benefit for the good of our community.”

“This is a very exciting time for Cambridge, which is a growth city with a strong economic base and great prospects. Demand for high quality new homes is high but the city is taking control of its future, making every effort to create the new homes and infrastructure that local people need.”

“This is our second phase at the North West Cambridge Development, which will be a dynamic and vibrant new community. We are looking forward to working with the University to help shape its future, where our plans for Eddington Avenue will create a real landmark for the site.”

“Hill’s growing presence across the South East and London demonstrates Hill’s trusted reputation within the industry as a partner of choice on large joint venture residential projects.”

Construction of the first new homes at North West Cambridge will start in spring 2016, with properties available for private sale from early 2017. For more details on the development, visit www.nwcambridge.co.uk.

Hill’s growing presence in Cambridge, London and the South East
Hill is a leading developer in the South East and London, and is actively working on over 50 residential developments. In Cambridge, Hill is set to deliver over 1,200 homes within the city through its developments at North West Cambridge, Ninewells, Virido in Great Kneighton and Magna in the city centre, and was recently crowned ‘Developer of the Year’ by the Cambridge News. 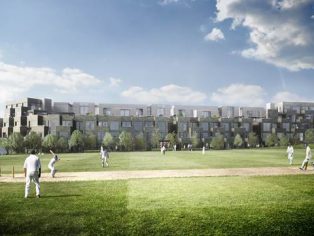