Inside Housing is a key industry body in the UK social housing sector, and the Development Awards are some of the most prestigious in the country. They act as a great opportunity for landlords, developers and architects to show off their best developments to the rest of the UK.

Highland Housing Alliance has been nominated for its successful regeneration project of the previously derelict Inverness site known as Glendoe Terrace – a historic site situated less than a mile from the city centre. The development provides 53 homes, ranging from one-bedroom flats to three-bedroom dwellings and includes refurbishment of the adjacent children’s play area as well as two bespoke homes suitable for people with disabilities.

The site, now known as Merkinch Place, provides homes appropriate for a wide range of occupants. It caters to a wide range of people and families, offering homes for affordable rent, mid-market rent and low-cost home ownership. The mid-market rent homes allow people to live in homes more suited to their needs than affordable housing, at a significantly lower cost than privately rented accommodation.

The project is an ambitious venture highlighting the determination and successful partnership between Highland Housing Alliance, The Highland Council, City Region Deal and the Scottish Government. Obrien Properties was the main contractor for this development.

“We’re really pleased to be shortlisted for this award, which highlights the great work done in regenerating the site at Glendoe Terrace. The site was derelict for years and has been repeatedly subject to anti-social behaviour and fly tipping.

“We have successfully turned it into a comfortable and affordable place to live, which has been hugely beneficial for the local community. We’ve involved them throughout the project, inviting residents for feedback as well as allowing children from Merkinch Primary School to design artwork seen within the development.

“It’s an honour to be considered for such a prestigious award, and we look forward to attending the ceremony in November.”

The winners will be announced at the awards ceremony on the 27 November at the Intercontinental 02 Hotel in London, with Highland Housing Alliance competing against top UK companies such as Choice Housing Ireland, Torus and Karbon Homes. 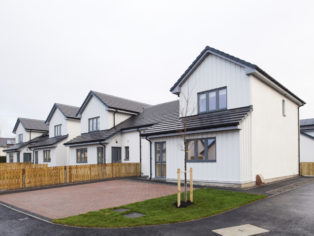