Harworth Hedgehog’s having one of those days!

Yesterday a team of builders from Woodhead Living, were shocked as they started the day’s work on Smith Square in Harworth, to find an uninvited guest loitering in the foundations.

A few feet down in one of the site’s dug foundations, a small hedgehog had fallen and got trapped. Assistant site manager and local lad, Craig Milns (pictured), was doing his morning site checks when he spotted the little chap. Before any more work was done, he was rescued from the hole, fed a saucer of water and advised about not visiting a building site again without his hard hat and site boots.

After making sure the hedgehog was alright, the team made sure he was released back into a safe area nearby.

The Smith Square project, which began in September 2014, is being delivered in partnership with Bassetlaw District Council, A1 Housing and construction company Woodhead. It will see the current non-traditional ‘Airey’ houses – a pre-fabricated house built in the 1950/60s – on Smith Square and Thompson Avenue, Harworth replaced with modern, energy efficient homes.

Woodhead was selected to carry out the project following an extensive tender process, conducted with the assistance of procurement consortium Efficiency East Midlands. 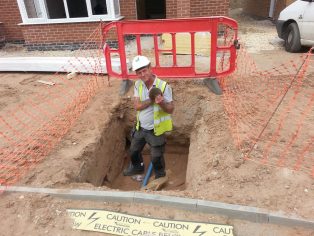