Costs for replacing cladding to ensure it is fire-safe on high and mid-rise buildings will be passed to housebuilders, developers and product manufacturers, in new measures announced by the Ministry of Housing today.

The Secretary of State for Levelling Up, Housing, and Communities, Michael Gove, said that he would be looking to the housebuilding sector as well as freeholders to divert their profits to pay for the ongoing re-cladding jobs in the wake of Grenfell.

Gove told the BBC that leaseholders would not be expected to pay the bill for remedying unsafe cladding on residential blocks, as has been the case. Instead, in addition to housebuilders, “companies who produced the unsafe cladding” would also face costs.

The government is asking firms to make financial contributions to a fund covering the full outstanding costs of remediating unsafe cladding on buildings between 11 and 18 metres high, estimated to be £4bn. Developers will also be expected to undertake all necessary remediation of buildings over 11 metres that they worked on.

Gove criticised developers for having made profits while not taking responsibility for recladding: “Not all major housebuilders have the same level of responsibility, but all of them have been making significant profits.” He added: “In some cases the developers own the the freehold to these buildings, and have not done the work required or have asked the taxpayer to do the work. That is unfair.”

Gove said that he wanted to have a “constructive conversation” with builders and developers, recognising that many in the industry have taken “a very enlightened approach.” Gove added: “We now need to make sure that everyone in the development and construction product manufacturing sector who has a responsibility steps up to the plate.”

The Secretary of State said in his letter to property developers: “It is neither fair nor decent that innocent people should be landed with bills they cannot afford to pay.”

Challenged as to whether the Department would take practical steps to enforce this new agenda, Gove cited the fact that he had recently intervened to stop firms involved with Grenfell receiving commercial benefits – namely vetoing Kingspan’s attempted deal with Mercedes, and Rydon receiving funding through Help to Buy.

Gove added that if necessary, the Government would use the “blunt, but heavy” instrument of taxing firms to “ensure they get the support we need on the front line.” 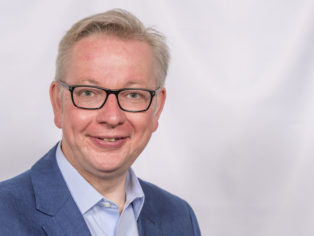