Garador takes cyclists for a ride

Over 500 cyclists turned out to raise funds for the Dorset and Somerset Air Ambulance by cycling 54 miles from Watchet Harbour on the north Somerset coast down to West Bay on the south.

The problem was that most of the riders had arrived at Watchet bringing their bikes by car and, after the race, trying to get so many riders and bikes reunited with their vehicles 50 miles away was a logistical challenge.

Garador decided it was a job for their distribution team. They not only provided a huge truck for transportation, but also devised a unique trailer and pole system so that the bikes could easily be taken into the trailer and firmly secured for the journey.

“Dorset and Somerset Air Ambulance is a vital charity and we were delighted to be able to assist. It was wonderful to see so many people taking part in this challenging event. I understand the cycle ride has already generated £40,000 with more money still coming in.” 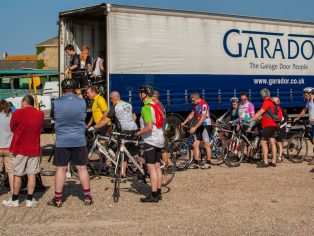