From trainee to trainer – in just 18 months

A high-achiever from Essex is closing in on her 100th house sale – just 18 months after joining a leading regional builder as a trainee.

Toni Brewster, who lives in Maldon, was appointed sales trainee at Persimmon Homes Essex in May last year.

She quickly impressed and was handed her own site to look after, The Drive in Gooshays, Romford, just eight months later – and she has since sold 79 properties, 48 of which have already exchanged.

Toni, 23, now has a trainee working under her – 22-year-old Jodie Silverman – and has been nominated in the Sales Trainee of the Year category in Persimmon Homes’ Young Achievers Awards.

The awards put the spotlight on Persimmon’s apprentices and sales trainees who have gone above and beyond to succeed in their role.

“I was working in retail and just fancied a career change. The Persimmon trainee scheme really appealed to me.”

“It went really well and now here I am 18 months later with my own site to look after and a trainee of my own.”

“It really helps that I was a trainee myself so recently so it’s all quite fresh and I can really relate to what Jodie is thinking.”

“I was really chuffed to be nominated for the Sales Trainee of the Year award. It’s really exciting.”

“Toni took on her first site in January at Gooshays where she has had a brilliant year. She has had no help within the sales office on the site but now has impressed so much that we now have a trainee working under her.”

“She is, in my mind, an excellent example of how the Sales Trainee Programme should work and has an excellent future with Persimmon Homes.”

Persimmon Homes is determined to invest in its young workforce, creating a highly-skilled base that will take the company forward in the future.

The Persimmon Homes Young Achievers Awards are open to all employees who are 25 or under. Winners from each of the builder’s 24 regions will go forward to be considered nationally by a panel of directors, including chief executive Jeff Fairburn.

Each national category winner will receive £1,500, while an overall winner – the Young Achiever of the Year 2014 – will receive an additional £500 and a trophy.

Special recognition will also be given to a young person who has demonstrated real entrepreneurial flair. They will be presented with the Duncan Davidson Award, named after the founder and life president of Persimmon Homes.

The Drive is a development of two, three and four bedroom homes located in Gooshays, near to Romford. Buyers can benefit from easy access to public transport being located in greater London’s zone 6, with a regular bus service into the city centre and affordable transport via the underground.

Ideal for first time buyers, prices for two bedroom apartments at the Drive start from £181,500 with four plots available now to move in for Christmas. What’s more, with the Westbury scheme, apartments can be secured with a 10 per cent deposit. The scheme provides a 15 per cent loan on the term of your mortgage, which is interest and repayment free for the first five years. 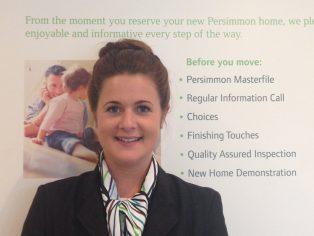