“As if George Osborne’s announcement in the Summer Budget of the phasing out of higher-rate tax relief on landlords’ interest payments wasn’t enough, today’s Autumn Statement introduces a further fiscal double whammy for landlords which could have major consequences for the residential property market.

“Firstly, higher rates of Stamp Duty Land Tax (SDLT) will be charged on purchases of additional rental property (above £40,000) from 1 April 2016 aimed specifically at buy-to-let properties and second homes. The higher rates will be three percentage points above current SDLT rates and the exclusion of companies from the charge indicates that the Government sees the freeing up of residential property currently in private hands as key to its housing policy.

“So, there will be pain on the way into the buy-to-let market through SDLT and a second announcement in the Statement revealed an unwelcome Capital Gains Tax (CGT) surprise on exit. From April 2019, a payment on account of any CGT on the disposal of residential property will be due just 30 days after completion. This compares to the current rules where the settlement of the tax due can be anything up to 21 months after disposal depending when in the fiscal year the sale occurs.

“Clearly landlords who have maximised their borrowings with a view to enjoying capital growth may now seek to restrict their financial exposure by disposing of parts of their property portfolios. Where such properties are standing at a gain, disposal before the CGT acceleration is due will clearly be advisable.“

Following announcements made in the Autumn Statement, one of the UK’s leading housebuilders has today unveiled plans to build over 80,000 new homes in the next five years.

Persimmon’s group CEO, Jeff Fairburn, made the announcement as he welcomed the Chancellor of the Exchequer, George Osborne to one of the company’s developments in Essex.

“One of this government’s top priorities is backing working families who aspire to own their own home. So we’ve got to get Britain building, and I’m encouraged to hear about Persimmon’s plans to build 80,000 homes.

“We made a start tackling the home ownership crisis in the last Parliament – but there’s much more to do to turn Generation Rent into Generation Buy.

“My Spending Review sets out our plan to deliver 400,000 affordable new homes – the biggest such building programme by any government since the 1970s.”

Since 2012, Persimmon has increased the number of homes completed each year by nearly 50 per cent.

This year it has made further progress, starting work on 250 new developments across England, Wales and Scotland. The business currently employs 4,500 people and envisages creating a further 1,000 jobs as part of its five year plan.

“Home ownership continues to be an aspiration for the majority of British people and these latest initiatives announced yesterday by the Chancellor should help that dream become a reality for many more people.

“Persimmon prides itself on building homes that people can afford to buy in quality locations. Most of our buyers are looking to stay in their local area and this is exactly what we deliver.

“Now is a great time to buy, with lenders increasing the number of mortgage products available. The new schemes announced yesterday, which include Help to Buy Shared Ownership, London Help to Buy and the Starter Home initiative will all help even more people into home ownership.”

Mr Fairburn said that to help the business meet demand, the company had increased its apprenticeship intake and had also introduced new schemes such as Combat to Construction and Upskill to Construction.

“We are fortunate to have a committed and very experienced team at Persimmon. We have taken on 140 ex-service personnel this year in addition to 200 young apprentices. In 2016 we will be turning our attention to people who feel they missed out on a traditional apprenticeship and will be offering fully-paid apprenticeships to more mature workers through our Upskill to Construction programme.”

“The AIA welcomes the Chancellor’s commitment to capital funding for road infrastructure up to 2021.

“It is important that local authorities get their fair share of this investment, which could go some way to addressing years of underfunding in maintaining the local road network.

“Local authority roads carry two thirds of all traffic and account for 98 per cent of our entire road network yet only obtain a fraction of the funding received by the strategic road network.

“This year our Annual Local Authority Road Maintenance (ALARM) highlighted the annual shortfall between what highways engineers need to maintain their roads properly and what they actually receive annually remains at just over £3.2 million per authority, with over £12 billion still needed to bring the network up to scratch.

“Readdressing the funding imbalance will help local authorities in managing a backlog of repairs and in the implementation of proactive ‘invest-to-save’ maintenance strategies to improve our local roads.”

“It is heartening that the Chancellor is ranking housebuilding high on a national scale, even if some of this is imprecise and difficult to quantify. The key issue is the execution of such schemes. BSRIA understands that a blueprint for 400,000 new homes has been unveiled. First-time buyers aged under 40 are to be offered a 20 per cent discount on new homes to help them onto the housing ladder. And a string of new measures to bolster the ability of private developers to construct affordable houses will be at the centre of a ‘bold plan’ to back families who aspire to buy their own home.

BSRIA is encouraged that Ministers are to change planning rules to release land specifically for developing starter homes. And developers are to be offered cash from the government to construct starter homes and regenerate ‘brownfield’ land. The Chancellor has pledged 135,000 new ‘shared ownership’ homes where buyers will be able to buy an initial stake in a new property and increase their share over time if they can afford to do so. This equates to £4bn being pumped into the scheme to provide properties for households earning less than £80,000 (or £90,000 in London). BSRIA welcomes the announcement by Treasury officials that the package represents ‘the largest programme of affordable housebuilding by a government since at least 1979 and the biggest ever programme of government building of homes for sale. Now all he has to do is deliver it.

Today’s announcement could lead to thousands of new jobs and apprenticeships being created in the sector but we must, therefore, ensure that industry can indeed find the much-needed qualified and experienced construction employees to meet this demand. We must not let a labour shortage in this field impede progress.”

On the apprenticeship levy:

“A new apprentice levy of 0.5 per cent will be introduced for employers by 2020 which will raise £3bn a year to fund three million apprenticeships. However, for construction and building services, the priority must be delivering high quality apprenticeships, viewed positively by employers. And although we finally have clarity over the threshold of the apprenticeship levy, it will trouble corporate businesses who will have to pay what is, in essence, a payroll tax. It is important that the delivery of the levy doesn’t dent other types of vocational training, which could be better suited to some businesses in the industry. Otherwise this is simply another example of ‘robbing Peter to pay Paul’ on behalf of business that will not have the desired result.”

“BSRIA is reassured that the Chancellor will safeguard adult skills funding for FE colleges. Now he needs to invest in Further Education as a whole. A strong further education sector, which meets the industry’s needs, is vital to boost productivity and ensure firms get access to the skilled staff they need for the future, especially in the STEM subjects. Let this government not be the one to let down another generation of ambitious youngsters.” 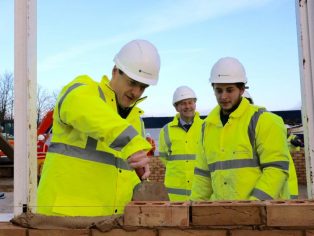