Newfoundland, currently the UK’s tallest built-to-rent tower, has been completed in Canary Wharf. The first of its kind in the area, the development is intended to kick-start a ‘15-minute city’ by introducing rental apartments into the key business hub. Jack Wooler reports.

Newfoundland, a prominent new addition to the capital’s skyline and a landmark building for Vertus, the Canary Wharf Group (CWG)’s residential rental arm, is now welcoming its first residents.

According to its owners, the opening of Newfoundland marks a “watershed moment,” being the first residential building on the main Canary Wharf Estate, as well as the tallest Build-to-Rent (BtR) scheme in the UK.

At 58 storeys, the building designed by Horden Cherry Lee hosts 636 apartments, ranging in size from studios to three-bedrooms, all set to offer “an unmatched lifestyle experience.” Vertus intends to achieve this through luxurious apartment specifications and ‘amenity’ spaces.

Situated on the western edge of the Canary Wharf estate, residents will benefit from the dockside setting on their doorstep – being able to walk the length of the dock to the underground station away from traffic. They can also enjoy its many external amenities, located just minutes away from their home.

To match its high-specification interiors, the building’s exterior has been designed so it can be ‘read’ from across the city. The striking diagrid facade, which itself forms an essential part of the building’s structural integrity, allowed the team to overcome challenging site issues. ​​

The scheme was also designed with sustainability in mind, with over 8,000 kg of CO2 emissions saved through the installation of PV solar panels on the roof. The roof also features a variety of wildflowers to support biodiversity on the estate.

Newfoundland is visible from across the city, its diagrid cladding legible from distance and making it instantly recognisable. In addition, its tall, slender structure and clearly defined silhouette mark it as a strong new landmark for London.

The building’s exterior is a direct response to the listed dock setting and riverside location, according to the architects. They say it has a “strong axial arrangement with the water,” and is situated on the direct axis of the Canary Wharf Underground Station entrance.

Like many tall buildings, the building’s architects opted for a ‘tripartite’ design, with clearly defined zones; a base, a middle level, and an upper level, each reflecting their functions.

On the ground floor, the building is set back underneath the above ground ‘transfer’ structure, making for an inviting entrance. This base is three double-height stories high, with the ground floor occupied by a grand entranceway, lobby, waiting areas, post delivery, lift lobby, and back of house facilities. The lobby has two entrances, one at each end, with an open frontage over the dock, and the desk itself continues the diamond exterior concept on the building’s interior, with its distinctive veined marble.

Going up, there is a public, “world-class” restaurant at level one, and a wide ranging amenity space at level two, including a lounge, private group dining, meeting spaces, fitness areas, and internal and external children’s play areas.

In the middle is the residential accommodation, located within the diagrid part of the building and covering over 56 floors. This section houses a GEA of 76,000 m2 of apartment space, all of which is served by four passenger lifts travelling at 6 metres a second.

Lastly, the top of the building houses a screened plant area. Among the many necessities of a building of this size and function is a tuned mass damper to reduce mechanical vibrations across the building.

Developing outside the box

One of the core concepts behind the project, according to its developer CWG, was the idea that everything would be provided for residents either on site, or within very close proximity to the building – the team intending to transform Canary Wharf into a ‘15-minute city’ through its residential addition.

The key planning idea is that everything tenants need for living – from socialising to shopping and healthcare – is placed within a quarter of an hour’s walking distance. All of this and more are well established on the estate, and dedicated footpaths making the entire area walkable. There are over 120 shops across five malls, over 160 events each year, a range of restaurants, bars and cafes, and green spaces – including London’s largest collection of public art.

Then, adding significantly to this are the ‘Club Vertus’ amenity spaces, which span 13,000 ft2. These are ​​intended by the developer to set the building apart as the “pinnacle of the BtR sector.” Residents enjoy access to a residents’ lounge area, which features a range of rentable spaces and games such as a shuffleboard, allowing them a shared space outside of their apartments to host guests, or simply get out of the house. Further to these, there are also fitness studios which offer virtual classes, and a gym.

Completing the amenities is a terrace garden that looks out across the River Thames, and includes a separate children’s play area and games room – which has been dressed interior designer Angel O’Donnell.

In order to explain how this major project came to be, and how the developer harnessed its scope to achieve it, it’s perhaps useful to go back to the estate’s beginnings.

Founded in 1993, the Canary Wharf Group has taken great strides to regenerate the area, owning nearly 100 acres of property at Canary Wharf and elsewhere in London. Its position overseeing this prime real estate allows it to effectively run the Wharf – with over 1,000 members of staff working 24/7 to manage its day to day facilities, landscaping, arts, events, and even security – transforming the area into the international business district it is today.

While the group’s recently created new ‘neighbourhood’ (on the adjacent Wood Wharf) was where it began to offer flats in the area, Newfoundland is the first scheme to be granted residential consent in the central business zone itself.

Before this, the site had previously been zoned for tall building development, but it had reportedly been overlooked for redevelopment as it had been considered too small for offices, and a previously consented planning permission for a 140-room hotel proved unviable.

As the building heights in the area were only governed by the aviation restrictions of the nearby London City Airport, there was an opportunity to build a large tower. Residential was seen as the best option financially, and one which City Hall reportedly welcomed – but site restrictions meant this was no simple task.

While offering a range of opportunities, the site came with numerous constraints, including its position next to the listed dock, its compact size, irregular shape, and its exposure to the elements.

Most important of all however were two London Underground tunnels running directly below it. This section of the Jubilee line, in which two tunnels create a V-shape directly under the building, was reportedly a key issue from the get-go, limiting options for ground piling in the narrow space between the tunnels, thereby preventing the structural capacity to rise as high as would be otherwise desired – the latter being necessary to make the project financially viable.

In order to tackle this barrier, the team first had to establish the maximum piling capacity possible, including the prospect of working into the exclusion zones around the tunnels – agreed by Transport for London with the caveat that construction only be carried out within restricted areas and times – and with a commitment to carefully monitor the effects of the works.

With the piling capacity calculated, it became clear that even if the building were made to be lightweight to reduce the piling necessary, a traditional core loaded structure would not suffice to accommodate the necessary building loads.

Instead, the Canary Wharf Group utilised an external diagrid, which is naturally stable, transferring forces away from the tunnels. This is based on a braced steel tube system, enabling a building to resist lateral loads when designed as a hollow cantilever perpendicular to the ground.

In effect, by using an assembly of columns and beams – in this case in a diagrid pattern – a rigid frame is formed that amounts to a dense and strong structural wall along the exterior of the building. This exterior framing is designed to be sufficiently strong to allow the interior of the building to be simply framed for gravity loads.

According to its architects, HCL, as opposed to using a traditional core loaded building, the design resulted in the building being 30% taller, 30% lighter, and 10% quicker to build.

The rest of the above ground structure is a hybrid steel and concrete frame, which was constructed in eight-storey lifts that required tight tolerances. This core rose relatively quickly, with the diagrid structure following on closely, providing structural stability as the tower progressed.

As the team moved up the building, they utilised a number of different types of construction solutions to create the varying floor plates – all catering for the differing needs of the building’s functions. On the intermediate floors between the nodes, for example, a post tension concrete solution was utilised, which allowed for thin slabs and a reduction in the amount of reinforcement necessary and overall weight.

Then, at the node floors, the team used a steel beam solution with precast concrete slab units. This creates a deck between the buildings, which performs as a platform from which to create the next four floors of the diagrid, and separates the work above from the construction on the intermediate floors.

With only four internal columns to contend with across all these floors – all being near the building’s core – the clear-span structure allowed for large open layouts, with generous areas of uninterrupted glazing. A further benefit introduced here, as the party walls are non structural, is that the building will permit reconfiguration at any time in the future.

Now completed, flats in the innovative structure have already sold well, notwithstanding the fact that with prices ascending from £1,928 pcm, the project is tailored towards the higher end of renters. The quality delivered befits this price tag however, together with the unique location and the wide-ranging amenities on offer that add desirability for this market.

“Tenants can expect first-class amenity spaces, designed by Johnson Naylor and dressed by David Phillips,” details Alastair Mullens, head of Vertus. “To complement these exceptional spaces, Newfoundland boasts the best uninterrupted views east, over Canary Wharf and the Docklands, or west towards the City and the rest of London,” he adds.

Concluding, Mullens says the opening of Newfoundland “marks a really exciting milestone in the evolution of the Canary Wharf estate, which many people now call home, making it a truly sustainable 24/7 city.” He adds: “It offers a truly unmatched rental lifestyle.” 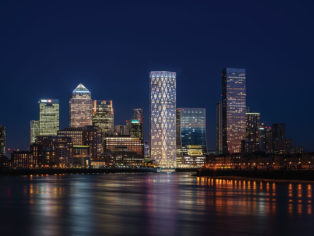