Aircrete as it is commonly known has become an increasingly popular choice for housebuilders throughout the UK, as it has throughout Europe. There are some parts of the industry however where the material is still seen as representing an unconventional approach. This is a misconception; aircrete has actually been used in the UK since the late 1950s.

Despite this longstanding use in construction, there is a belief that high strength materials such as dense aggregates have to be used on foundations could be costing contractors both time and money. In reality, aircrete provides a simplified and cost-effective method of constructing foundations for residential properties.

In every test that aircrete has faced as a foundation material, it has proven itself a resilient building material for masonry foundations in the homebuilding sector, for a multitude of reasons. Aircrete provides a simplified method of constructing foundations. Many builders using traditional materials still construct their foundations using two separate 100mm leaves, laying them with the required cavity onto a strip foundation to support the wall above. This cavity wall is tied together using wall ties and once complete, the cavity is filled with lean mix to shore up the structure.

By contrast, a solid aircrete foundation requires only a single leaf of blocks, and can be laid onto a strip of poured concrete the thickness of the wall. This method also requires no mortar at the perpendicular joints; instead they can be butted against each other. Using foundation blocks of a greater width such as 355mm means the laying rate of aircrete is faster than that of aggregate concrete, enabling contractors to complete jobs in less time but to the same high quality.

The weight of an aircrete block is only a third of the equivalent dense aggregate block, which means they are quicker and safer to transport. Unlike dense aggregate, aircrete can be cut with a hand saw, and because aircrete is so easy to manipulate on site, wastage is also vastly reduced.

The advantages go further than just simplicity and rate of construction. Independent construction and property consultants Calford Seaden recently published the Foundation Cost Comparison Study, which gave a detailed analysis of the cost of a range of foundation materials. The cost is indicative of a typical three-bedroom semi-detached UK home and results show that a saving of close to 25 per cent for the total build costs of foundations alone.

There are several factors that contribute to the cost effectiveness of aircrete as a foundation material. A fast build speed equals a reduction in labour costs but also the solid construction means fewer materials are needed; materials such as wall ties, lean mix and mortar at the perpendicular ends.

Despite aircrete being one of the lightest forms of concrete available for building, aircrete is fully load-bearing and blocks are available in a range of strengths up to 8.7N/mm2, which is more than enough for use in buildings up to three storeys. It is a common misconception that the strength required for foundations can actually be less than that required to build the superstructure. The area where strength is needed most is at the lintel bearing where windows and doors are introduced into the wall structure. As the load spreads down the height of the wall, the loading is evenly distributed across the whole length of the wall below the ground floor DPC.

Although they remain unseen after a project is completed, building foundations are continually under attack during the cold winter months in the UK. Problems can occur when inclement weather conditions create freezing and thawing which in turn can lead to potential spalling in concrete. Water naturally freezes and expands in the cold, and this can be highly damaging to many variants of concrete. Due to the density of the blocks, aircrete possesses enhanced freeze/thaw durability, giving it a lower chance of being damaged during the colder months. These performance characteristics have been tested and certified by the BBA.

Sulphate attack is another potential danger for foundations. It can cause damage serious enough to compromise the structure of a home. This occurs when natural sulphate in clay soils leaches into the foundation materials, causing certain types of materials to expand. Certain types of concrete material are highly susceptible to attack from sulphate chemicals that exist in soil and groundwater.

Unlike the concrete equivalent, aircrete blocks have been shown to have superior resistance to sulfate attack when used below DPC. Aircrete has been tested and assessed by the BBA as being suitable for use across all applications where sulfate level are likely to be encountered.

Aircrete blocks possess a number of advantages over traditional materials, which make them a fantastic all-round material for use below DPC level. By making a simple material switch, housebuilders can enjoy improved logistics and performance benefits, while also saving money on construction costs. When all the facts are considered, all directions point towards aircrete being the foundation material of the future. 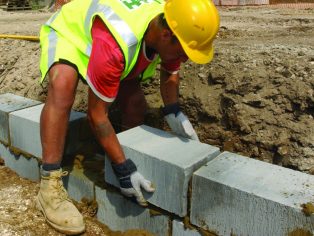 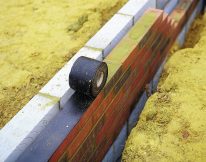