Flooring is the foundation

Adrian Crow of Insulslab explains the theory behind delivering a foundation up to finished floor level – and how this can pay dividends from both a commercial and performance perspective.

While the flooring package is traditionally treated as a separate concern to the groundworks and foundation construction, housebuilders are increasingly recognising the benefit of adopting a simplified approach that combines the two.

Foundation methods typically fall outside of the Part L compliance remit. This is because traditional systems – such as suspended slabs, beam and block floors or raft foundations – are classified in groundworks packages and do not form part of the exterior envelope. By contrast, fully integrated foundation systems can deliver the foundation up to ground floor level, which as part of the envelope contributes to building performance against Part L requirements and SAP calculations.

When seeking to improve the overall thermal performance of a building through the use of a fully integrated foundation system, the highest U-values are achieved by using products that incorporate insulation within their design. For example, some systems are constructed using expanded polystyrene (EPS) pods. These lightweight pods are simply laid in place in a prepared formation and then steel fibre reinforced concrete (SFRC) is poured over them to deliver the foundation and slab up to finished ground floor level. This type of build-up can typically achieve U-values as low as 0.10-0.13W/m2K (depending on P/A ratio).

In contrast, for traditional floor build-ups to achieve the same level of thermal performance, the insulation layer with a lambda value of 0.022 W/mK on top or below of the foundation would need to be approximately 160 mm to 180 mm thick. As well as representing a significant increase in insulation material cost, such a thickness of floor depth will negatively impact on the foundation depth.

The key to the performance of super-insulated foundation systems is that insulation is inherent in the design. As well as providing high levels of thermal insulation, the pods form part of the foundation structure, which ultimately helps reduce the foundation weight and utilises the established waffle slab construction technique.

Beyond the proven thermal insulation benefits of such highly insulated and integrated foundation systems, housebuilders are increasingly adopting this modern method of construction thanks to its speed of installation and the cost savings that can be achieved.

For example, compared with traditional build methods, the nature of an integrated foundation system means a simplified installation process and ultimately helps makes site programmes more efficient. Less time is needed to prepare the ground for construction, as no trenches are required, and the system itself is quick and easy to install. These factors can culminate in a cost reduction, both on materials and labour.

In addition, the minimal excavation translates into reduced spoil to cart away, as well as less site traffic. Finally, the lightweight pods and use of SFRC, which eliminates the requirement for steel reinforcement, minimise manual handling on-site and contribute to a positive health and safety environment.

Given the superior thermal performance of integrated systems that incorporate EPS pods within their design, developers often favour this build type when higher levels of insulation are required. However, cost and time savings are increasingly prevailing factors during the specification and procurement processes. The table on the following page provides a quick comparison of the relative benefits of fully integrated foundation systems with traditional techniques.

Bovis Homes adopted an integrated foundation system when it was contracted to build 222 two, three and four-bedroom homes at Pebble Beach, Seaton, Devon.

The geology of the site, a former caravan park, consisted of salt marsh deposits overlying Branscombe Mudstone Formation. To remediate the ground in preparation for build, a significant enabling works operation was undertaken, which involved raising site levels through importing marine-dredged sand. This involved a period of time for settlement and a programme of surcharging the site. Subsequent site investigation and geotechnical analysis confirmed a suitable bearing pressure of 50kN/m2 .

Based on the geotechnical profile, Bovis specified a semi-raft foundation to meet the load bearing pressures of the ground. Ordinarily this is a more costly foundation technique than trench or beam and block; however by using a fully integrated and super insulated foundation system, Bovis was able to realise the performance benefits of a traditional semi-raft construction – with additional time and cost savings.

“We needed to improve on a traditional raft solution and by re-evaluating the options were able to arrive at a design which exactly addressed our requirements. It worked well with the overall development programme and allowed the smooth placing of orders and efficient supply of materials. The careful planning and effective coordination between parties ensured the foundations were constructed well ahead of the superstructure programme, which ultimately allowed the development to progress at an excellent pace.” 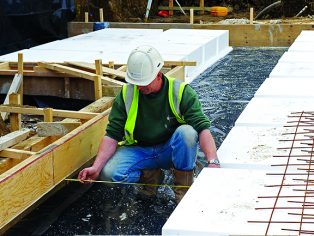