Floating buildings FDN save people from climate change and tsunamis

Designing floating houses and other buildings that can withstand sea level rise and flooding as well as strong tsunami proof constructions, Dutch engineering & construction company FDN offers sustainable solutions for the problems of climate change and other disasters all over the world.

Being one of the most innovating companies in the Netherlands, FDN already has received several awards. Now it has been nominated for the European Business Award.

For Asian coastlines, FDN designed the tsunami resistant house. Due to de hydrodynamic design and concrete, waterproof stable structure it can withstand the worst tsunami’s. Solar panels on the roof and watertight windows keep the inhabitants safe during a tsunami wave attack and after.

For European countries FDN designed several floating constructions like floating buildings in Amsterdam, a Yacht hotel and a semi floating apartment, where a special hydraulic system stabilises the position of the house during storm, waves and water tides, assuring a comfortable living without any ship-like behaviour of the house.

Floating constructions are also applicable for expanding cities as Oslo or tourist resorts in Sri Lanka, where FDN is designing a resort with prefab floating islands causing no damage to the environment.

For the Colombian government FDN designed an amphibious house, built on land but able to float during floods, while anchors keep it in position. Solar panels make if self sufficient, whereas easy transportation and assemblage keep the costs below 20.000 dollar.

Another FDN invention are sustainable floating breakwaters which already protect the harbours of Monaco and the Greek island Messolonghi. They can be combined with wave energy converters.

“FDN’s Ultrabridge, made of ultra-high performance concrete, won several awards. For the European Business Award 2014/2015 FDN already received the Ruban d’Honneur for innovation, recognising the company as one of the top 110 businesses in Europe.” 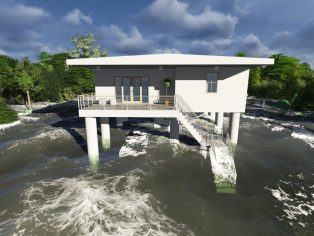