With first time buyer purchases on the up and interest rates at their lowest for years, 2015 is shaping up to be a great year for homebuyers. A combination of factors are contributing to the creation of strong market conditions, making it cheaper to borrow and easier to move up the property ladder since before the start of the financial crisis in 2007.

Having enjoyed a strong start to the year, Barratt Homes has noted a marked increase in buyer confidence, signifying a return to good health for the property market and the housebuilding industry.

Steve Mariner, sales and marketing director for Barratt Homes West Scotland commented: “It is great to see that the lending market is finally shifting in favour of the customer. At Barratt Homes we’ve seen a large rise in demand for new homes, signifying that more people, from first time buyers to upsizers, are not only more confident about making a move, they’ve also been able to secure the necessary finance. This is not only good news for business, it is great news for the economy and the homebuilding industry in particular.”

Here are five reasons why there’s no time like the present to purchase a home:

Increased competition in the mortgage market, falling interest rates and the availability of long term fixed rate lending packages are reducing the cost of borrowing for many homebuyers.

This represents a dramatic change compared to just four years ago when two year fixed rates passed the six per cent mark – more than double the rates being quoted today.

Even stronger rates can be secured through brokers, making it worthwhile to consult with an independent financial advisor (IFA) during the homebuying process. Barratt Homes works with a range of IFAs including the award winning First Mortgage, who picked up the Best New Build Broker prize at the 2014 British Mortgage Awards.

In the 2014 Autumn Statement changes were made to bring an end to the ‘cliff edge’ stamp duty and land tax system. The new system for Scotland – Land and Buildings Transaction Tax – which is force is a proportional system set to benefit first time buyers as well as those looking to take a step up the property ladder.

Introduced in 2013, the Help to Buy (Scotland) scheme aims to help stimulate Scotland’s housebuilding industry and to help people buy a new property from a builder that has been approved to participate in the scheme.

Help to Buy (Scotland) enables buyers to secure a mortgage with as little as a five per cent deposit, and 75% mortgage. Under the scheme, the Scottish Government takes a 20% equity stake, but the buyer owns the property outright and has full title to it. Barratt Homes is one of Scotland’s largest participating builders, and a significant number of customers have already chosen to purchase using the scheme.

£100 million has been set aside for Help to Buy (Scotland) in the 2015/16 financial year, which is welcome news for those who missed out in previous years. Still, the funding is in significant demand across the country and allocated to buyers on a first come first served basis, so those seeking to make use of the scheme must act fast secure their new home.

Due to ongoing reform within the financial services industry, the process for securing finance has become much more detailed. This need not be off putting for those looking to apply for a mortgage, as most major housebuilders like Barratt Homes are now able to provide a free independent financial advice service to customers.

IFAs provide accessible and impartial support to buyers. By being knowledgeable about the latest processes and policies, they are able to guide buyers through their mortgage application, and ensure the right deal is secured for their needs and circumstances.

Also, as was mentioned previously, brokers and IFAs are often able to secure special rates, making it very worthwhile to consult with an advisor during the homebuying process.

Another way the current market is supporting buyers is through fixed pricing as opposed to the use of ‘offers over’ and closing dates, which is often used for second hand properties and sees properties sell for well in excess of fixed prices. Barratt Homes offers fixed pricing on all developments which means you know what you are going to pay from the outset.

With increased market activity and confidence comes increased development activity. As a result, many housebuilders are progressing new projects across Scotland.

Barratt Homes recently announced plans to open a number of new sites across the central belt during 2015, bringing choice to the market for buyers, as well as new jobs to the local industry.

This brings many benefits to buyers, from being able to choose their own plot, housetype, finishes and fittings depending on the build programme, to having numerous homes in a particular area to choose from.

It also means that more people will be active within the market, both buying and selling, which is vitally important for those who need to sell an existing property in order to make their next move.

“Judging from customer feedback, the picture being painted of the current property market is very positive indeed. A competitive market opens the door to some excellent deals, and with the introduction of Land and Building Transactions Tax, many people will be able to move to a larger home without having to pay as much in tax.

“Furthermore, an additional year of Help to Buy funding is great news for movers across the country as well as the industry as a whole. The scheme has helped to reignite housebuilding in Scotland, and it’s clear to see this has reaped benefits for the economy as a whole.”

Barratt Homes is currently building new homes at a number of locations across the central belt of Scotland. In the east of Scotland these include Barratt at Eskbank, The Elms at Kirkliston, Vinery Park at Clovenfords and Appleton Grange in Livingston. In the west they include Burn Brae in Cumbernauld, Highland Gate in Stirling, Kings Way in Renfrew and Westlin Walk in Kilmarnock. 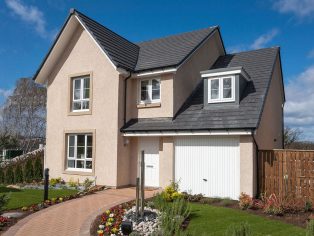