Scottish developer Murray Estates’ plans for significant economic investment in West Edinburgh – one of the most strategically important development sites in the UK – have been approved by Scottish Government ministers.

The proposals are one of the largest single housing approvals in Edinburgh in recent years and form the first stage of Murray Estates’ Garden District vision that will help meet the capital’s future housing needs.

The first phase of the Garden District – Redheughs Village – is set to deliver 1,350 new homes of various types, 330 of which will be affordable, as well as associated supporting infrastructure and significant local road improvements. The development will also provide a new primary school, neighbourhood centre, convenience retailing and a 40-acre park for the community.

Ministers approved the proposal following the reporter’s recommendation. They concluded that the development is sustainable, would contribute significantly to housing land supply, and is located in close proximity to public transport links.

The plans will now be subject to detailed planning from City of Edinburgh Council.

The new village will link to the adjacent business park and Royal Bank of Scotland’s global headquarters at Gogarburn. Situated in the emerging West Edinburgh growth area, Redheughs Village is the first phase of the much larger Garden District vision which can deliver a further 6,000 new homes, green space, employment, land and education facilities.

Future phases are already under discussion with the City of Edinburgh Council as part of its consideration of development in the wider West Edinburgh area.

Jestyn Davies, managing director of Murray Estates, said: “We are delighted to have gained the support of the Scottish Government for this important first phase of the Garden District. Redheughs Village and the broader Garden District will form a world class extension to Edinburgh. It will also help deliver housing in a way that eases pressure in other parts of the city and embraces best practice in placemaking. We firmly believe that Edinburgh’s Garden District shows how this great city can expand to meets its acknowledged housing demand in a sustainable way.” 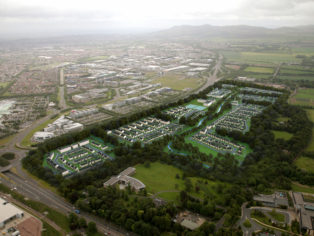