Notting Hill Housing Group’s 108 home development at Micawber Street in Hackney is using an innovative smoke control system from SE Controls to not only provide smoke-free escape routes in the event of a fire, but also ensure that day-to-day temperatures in communal areas and corridors are kept at comfortable levels for residents.

Initially, the six-storey building was designed with a mechanical ventilation system and a separate dedicated environmental shaft to help cool the building and address the overheating effect caused as a by-product of routing heating distribution pipework in building voids to optimise space.

SE Controls was invited to evaluate this system by conducting a thermal modelling analysis on the building and worked closely with the design team and contractor, Ardmore Construction, to engineer a combined smoke control and environmental solution. Based on SE Controls’ SHEVTEC® system, which utilises the building’s existing smoke shafts for natural ventilation, significant thermal performance improvements were achieved along with major cost savings on the project.

This was achieved by the use of 0.5 m2 permanently open louvres at roof level and within the stairwell, while also utilising the automatic smoke dampers on each floor to vent heat into the smoke shaft. Dedicated smoke ventilation roof vents were also installed, which automatically over-ride the natural ventilation system in the event of a fire.

In normal day-to-day operation, cooler air enters the building via the main doors, which are held open by electro-magnetic devices, and flows across the lobby before being exhausted through the ventilation system’s roof vents. While the lobby temperature is controlled by a tamper proof thermostat, in the event of a fire, the lobby doors and smoke dampers close automatically, except the one located on the fire floor. This allows smoke to be drawn from the corridor, in to the smoke shaft and away from the stairwell to maintain a smoke free escape route.

The entire system is controlled by networking the smoke ventilation system’s smoke dampers on each floor with SE Controls’ OS2 controllers incorporating OS link network cards. In addition, the system also incorporates an SE Controls NVLogiQ room controller in the fist floor lobby core to monitor and log the system’s performance for future analysis and tuning.

SE Controls specialises in the design, project management and installation of advanced smoke ventilation and natural ventilation solutions to meet the needs of architects, contractors, building services engineers and facilities managers worldwide. Further information on SE Controls’ products, solutions and projects can be obtained by visiting www.secontrols.com or calling +44 (0) 1543 443060. 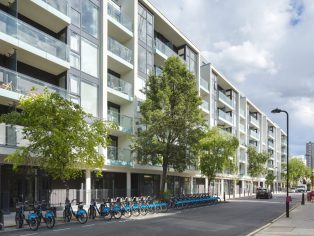