The team behind Fairview New Homes’ flagship Pulse development are celebrating after it was named among London’s finest at the LABC regional Building Excellence Awards.

The landmark development in Colindale, North London, was a finalist in three categories – Best Change of Use of an Existing Building or Conversion; Best Social or Affordable New Housing Development; and Best Customer LABC Partnership with a Local Authority Building Control Team.

Pulse is a development of more than 900 apartments located next to Colindale Park. The Victorian Colindale Hospital building was transformed into nine luxury apartments as part of the first phase of the scheme.

Area Construction Manager for Fairview, Stephen Brown, has masterminded the build programme from the outset.

“We were delighted to be nominated for the London LABC Awards. It is always nice to be recognised and to make it to the finals in three categories is a fantastic achievement.

“The awards ceremony at The Guildhall was a great night. It was a real honour to be named among the best in London.”

Local Authority Build Control, known as LABC, represents building inspectors across the country. They make regular visits to developments to ensure standards are being met. The best are nominated for the regional awards and a judging panel selects the elite few which progress to the regional finals.

“The LABC inspectors spend a lot of time on-site and we have a good relationship. We have also worked closely with English Heritage and with Barnet Council’s conservation team because of the listed building renovation at Pulse.”

In just four years since groundworks began, Pulse has transformed Colindale Avenue and made a significant contribution to the wider regeneration of the area.

The project began with the conversion of the former hospital. A team of specialist craftsmen was brought together and under Stephen’s guidance, they meticulously restored the building piece by piece.

Materials were reclaimed wherever possible and many more were replicated. The restoration of the bell tower alone demanded careful planning under expert guidance.

“The hospital conversion was a demanding project but everyone involved was pleased to have the opportunity to work on it.

“The LABC Awards have provided an opportunity to reflect on what was achieved. At the time we were so focused on the job that we probably didn’t appreciate how special it was but it is a project to be proud of.”

Pulse’s location next to Colindale tube station has made it a magnet for commuters seeking more for their money outside of central London.

With the listed building conversion complete, the focus is now firmly on new-build apartments and demand continues to soar.

“There were times when developments everywhere were closing and we were busy throughout.

“We currently have a construction team of 250 working at Pulse to keep pace with sales. We have a solid team – everyone knows what is expected to get the job done on time and to the standards we expect.”

One of the awards nominations recognised Fairview’s commitment to delivering affordable homes as part of the Colindale regeneration. Fairview has handed 193 units over to Notting Hill Housing, many ahead of schedule.

“The quality of the product is the same whether we are building homes for private sale, shared ownership or affordable rent.

“We work closely with the affordable housing providers. We have brought forward the handover at times when they have been struggling on other development sites. If we can help we always will.”

Work is now underway on the final phase of apartments Pulse, known as Varsity. Fairview is building 150 homes on land previously set aside for Barnet College before it opted to move to Grahame Park Way. Homes at Varsity are likely to go on sale early in 2015.

Fairview has also purchased the former British Newspaper Library opposite Pulse in Colindale for housing development. 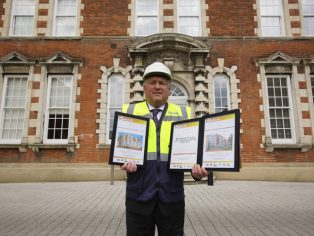 Fairview New Homes Area Construction Manager, Stephen Brown, celebrates making the finals of three categories in the LABC Building Excellence Awards. Behind him is the former Colindale Hospital which was refurbished at the start of the landmark Pulse development

Fairview New Homes Area Construction Manager, Stephen Brown, celebrates making the finals of three categories in the LABC Building Excellence Awards. Behind him is the former Colindale Hospital which was refurbished at the start of the landmark Pulse development