eMoov: Less than half of London’s property is priced at the average or below

Fixed fee estate agent eMoov.co.uk has determined how many properties across London are sold at over half a million pounds or less.

The research¹ showed less than half (46%) of the properties for sale in the capital were sold at £550,000 – the average London house price – or less.

The least affordable area was Kensington and Chelsea, where just one fourth (6%) or fewer of the properties were listed under £550,000.

“When you talk about the average cost of buying in the capital being over half a million pounds, the mind really does boggle.

“Regardless, for many the average house price is a benchmark, a milestone, on just what they need to have in the bank to live in a certain area. But this average price masks the true cost of living in the capital or even where in the capital you can live for that matter.”

A further 12 of the capital’s boroughs were found to have just 50% or less of its stock listed for the average price of £550,000 or under.

“When you consider that even with that sort of healthy budget, you would have to restrict your property search by removing more than half of the properties currently for sale in the capital, it really highlights how little £550,000 can get you in the London market.”

¹ eMoov analysed current stock levels for each London borough listed across all of the major portals and compared it to the stock listed for £550,000 or less.

eMoov then took the total stock under £550,000 and recorded it as a percentage of the total level of stock across the capital. 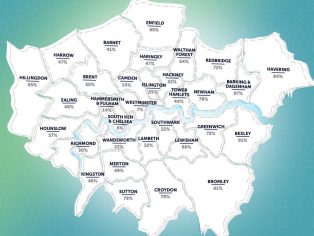