Electric heating – the future has arrived

Richard Brown, managing director of Electrorad, considers the advances in electric radiators over the years, and explains why they are fast becoming a number one choice with housebuilders and developers.

As energy efficiency remains a critical factor when designing a new home or developing an existing property, house-builders and developers need an affordable and energy efficient heating solution that combines safety with versatility, comfort and control.

Thanks to new innovations, technologies and legislation, the electric radiator market has evolved significantly over recent years, with design and functionality now firmly in line with the demands and needs of the housebuilding industry. With a range of radiator styles and even colour options to choose from, they can also create a statement piece and become a key part of the interior design. But just what makes electric radiators the hero of energy efficient heating? Energy savings: Today’s electric radiators can give traditional gas central heating systems a run for their money. They can be cheaper to install and maintain than gas systems, and can also deliver on running costs.

There is no need for inflexible electrical tariffs; today’s modern electric radiators are 100 per cent efficient at the point of use, meaning that there is 100 per cent conversion of electrical energy input to heat output. Thanks to sophisticated programming devices and controls, they use only the electricity that’s needed to maintain comfortable temperatures.

Controls and comfort: Due to advances in electric radiator technology, accurate energy saving digital controls are commonplace for both time and temperature flexibility – some being +/-0.1°C. Each radiator is individually thermostatically controlled so they can be left to run independently, or the whole system can be connected together, linked to a central room controller and programmed to meet specific heating needs.

Wireless radiators are also becoming extremely popular due to their fully programmable RF controls. This feature allows the system to be divided into zones, automatically turning the radiators on and off according to the temperature requirements of each zone. Multiple zones may be set up within the home to control separate floors or areas. This can save energy as a result, as no heat is wasted warming unused rooms/areas unnecessarily.

A new and revolutionary smart control system is also now available for electric radiators that offers wireless integration of thermostat and wireless control built into each radiator, and will provide the ultimate control of electric heating across the home. A central touchscreen will act as the wireless home control and wi-fi gateway to enable smartphone/tablet app control of any room in the house from anywhere in the world.

In terms of comfort, electric radiators produce both radiant and convection heat – convection warms the air and circulates it around the room, while radiant heats people and objects directly. It is quite typical for a thermostatically controlled electric radiator to be drawing power for around 30-50 per cent of the time in order for a room temperature to be maintained. This means a 1.5kw radiator may only use up to 750 watts per hour (depending on the room heat loss), while keeping the room and the occupant(s) warm.

Safety: Unlike early electric models, today’s radiators are far safer as the hot elements are sealed within the metal casing and are actually immersed within fluid. As both dust and objects cannot fall onto to the elements, this makes them safer to run and safer to touch.

Such safety features, along with the use of the highest quality components, means that some electric radiators can offer guarantees for up to 30 years and cover all internal components (i.e. electric elements, thermal switches and wiring) excluding thermostat.

Versatility: Electric radiators are now simple and fast to install and can be sited almost anywhere in a property, with larger units capable of warming sizeable rooms with ease. They can be retrofitted independently from any existing hot water system, for example in conservatories and extensions, removing the need for any additional pipework or a higher output replacement boiler.

They are particularly suitable for apartment blocks where gas is often not accessible or not allowed. And, if additional heating needs to be introduced at a later date, electric radiators can be added to the system accordingly. Electric radiators are also a perfect replacement for night storage heaters as they utilise the existing wiring, causing minimum disruption at installation.

Aesthetics: Electric radiators have come a long way since the days of bulky storage radiators that burned dust and left brown marks on walls, or dimpled panel convector heaters that provided minimal heat. Instead, we now have sleek, minimalist and coloured radiators that are in keeping with latest style trends in the home and which now pose more of a threat to traditional gas central heating systems than ever before. Driven by innovative manufacturers and imaginative interior designers, there is now a wealth of sizes and designs available; from sleek vertical models to small towel radiators for cloakrooms.

A number one choice: The demand for electric radiators has grown exponentially over recent years, and it looks set to continue. With increasing sales, more product choice and avail- ability, it’s clear to see why they appeal to housebuilders. For property developers looking to refurbish existing electric systems, or even replacing traditional gas systems, it’s simply out with the old and in with the new. The future of electric heating has indeed arrived. 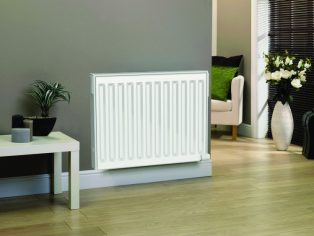 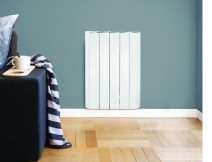 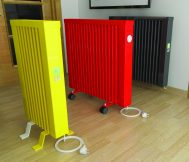