The exciting development, offering 624 new private apartments contained in two high-end residential towers, will launch its East Tower for sale on 24 September 2015. Overlooking South Dock with commanding views of Canary Wharf, each apartment offers an extensive private ‘sky garden’, up to 37.2 square metres in size. Wardian London will provide a tranquil oasis within the heart of London’s most lively business district, promoting a sense of wellbeing and creating a serene escape within the city.

Alongside the apartments, Wardian London will contain a vibrant rooftop observatory bar, with a vision for London’s highest botanical gin garden; two restaurants; and a 25 metre open air swimming pool, set within a flourishing tropical environment. In addition there will be a new landscaped public plaza with sunken gardens to immerse residents and visitors in lush greenery upon arrival. As across all their schemes, Ballymore will continue to manage the development after completion so residents will also benefit from an exceptional service level and 24 hour concierge.

Ballymore has extensive experience in this area of London, having completed a number of property developments near to Canary Wharf including Providence Tower, New Providence Wharf, London City Island and Pan Peninsula. Over the past 25 years Ballymore has played a crucial role in the consolidation of Canary Wharf as a world-leading business centre and as London’s focus shifts east the opportunities in this area are set to grow.

Taking its name from the traditional Wardian Cases – first created in East London to transport botanical plants – Wardian London offers a sense of escape and tranquillity, whilst remaining connected to thriving Canary Wharf. Used as the first carriers to transport tea plants to India, these terrarium boxes were fundamental in the British Empire’s expansion into East India, revolutionising East London as the banking and commerce hub that we know today.

Fusing grand architecture with botanical beauty, Wardian London is pioneering the concept of blending indoor and outdoor living in London, as seen in far flung destinations such as Brisbane and Singapore. Atriums located throughout Wardian London’s two towers exemplify this by creating a tropical paradise filled with a multitude of plants and flowers from around the globe, offering residents a secret escape.

Huw Morgan from Camlins, one of the UK’s leading landscape architects, working on this project commented:

“Wardian London offers an exceptional opportunity to engage with the natural elements while living in the thriving hub of the city. Green space is one of the most sought after commodities in London and Wardian London capitalises on this with abundant planting of more than a hundred different exotic species of plants and flowers across the development. Creating hidden sanctuaries, inspired by Wardian Cases, was of utmost importance in this project to deliver a tangible retreat from city living.”

Meeting the growing demand for residential property in East London, Wardian London reinforces the Docklands area as the new hub for East London. Just a three minute walk from Canary Wharf, Wardian London will comprise of 624 suites, apartments and penthouses in two luxurious tall buildings rising to 50 and 55 storeys. The first residents are expected to move in during 2019.

“At Wardian London we are pioneering outside-in living which demonstrates our imagination and innovative design. We are known for delivering some of the best-known and most ground-breaking developments in London and have extensive experience in and around Canary Wharf. This project will cement our reputation to go above and beyond in the creation of a truly unrivalled product.” 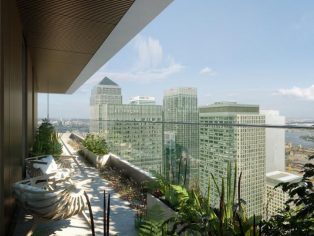