Double celebration at The Acorns

Persimmon Homes opened the doors to its brand new showhome at their Solihull development, The Acorns, with the help of their chosen charity last week.

And as if that was not enough reason to celebrate, the leading housebuilder also handed over funds totalling £7,000 raised by staff throughout the year to help support Acorns Children’s Hospice.

Leading the event was 18-year-old Pavan who has a Multiple Sulphatase Deficiency and has used the services of Acorns at its hospice in Birmingham for fifteen years.

Pavan and his family were on hand to perform the ribbon cutting to officially open the new four-bedroom detached ‘Exeter’ showhome as well as collect the cheque on behalf of the charity.

“We are extremely proud to have a new Persimmon Homes development named after our charity and were honoured to be part of the official launch.”

Acorns supports and cares for life-limited and life-threatened children and their families across the heart of England both in their homes and in three hospices, situated in Birmingham, Walsall and Worcester. It costs £750 per day for each child’s care and Acorns relies heavily on the community to fund the majority of its work.

“Pavan’s condition is a rare genetic disorder that seriously affects his mobility and speech. He cannot sit up, turn in bed and doesn’t sleep through the night and sadly there is no treatment or cure.”

“As with many other life limited children Acorns relieves the pressure on Pavan’s family by providing respite care which is funded by companies like Persimmon Homes South Midlands.”

In October a fundraising team from Persimmon Homes South Midlands swapped their suits for their trainers to take part in this year’s Bupa Great Birmingham run and raised over £4,500 in the process.

Persimmon Homes South Midlands sales office manager, Amanda Rogers, who took part in the 13.1 mile course said that Acorns has had a huge effect on her and her colleagues.

“Anybody who has seen the work which goes on at Acorns knows what a fantastic job they do and just what a remarkable place it is. It is impossible not to be moved by both the courage and strength of the children and the levels of care and dedication shown by the amazing staff.”

“Running the half marathon and seeing the sort of impact the money we have raised will have has certainly made all the training worthwhile. The vast majority of Acorns funding comes from public donations and fundraising which makes it all the more gratifying to have raised such a huge amount.”

Speaking of the development, Amanda said:

“The development has only been open for seven weeks but we’ve had a great response with over 3,000 people registering for information and fourteen homes sold off-plan.”

“And with the showhome now open, we look forward to welcoming more people to The Acorns where they can see the stunning craftsmanship and attention to detail for themselves.” 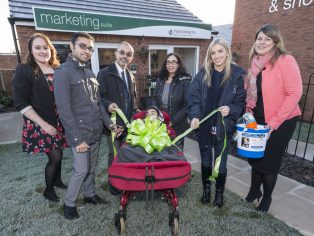